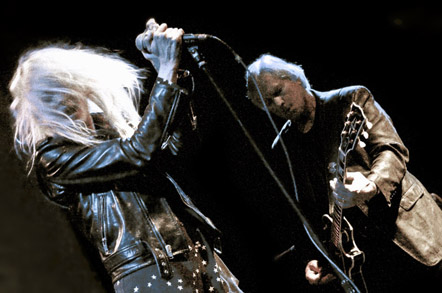 3. “Scene of the Crime” w/ Joe Cardamone (The Icarus Line)

5. “Till The End of the Night” w/ Alison Mosshart (The Kills / Dead Weather)

12. “Cock in My Pocket” w/ Shea Roberts (The Richmond Sluts)

HERE’S WHAT PEOPLE HAVE BEEN SAYING ABOUT JAMES WILLIAMSON’S RE-LICKED ALBUM:

“‘I Gotta Right,’ the second single from Re-Licked. is a manic, guitar-blazing rocker featuring belter Lisa Kekaula of The Bellrays.” – USA TODAY

“James Williamson’s aggressive guitar style may be the most influential in punk.” – NPR’s WORLD CAFE

“An avalanche of raw riffs… and Williamson playing white-knuckled leads like he absolutely refuses to let the Stooges’ music go gentle into that good night.” – PREMIER GUITAR

“Williamson himself still plays with a young man’s vigour, alternating exhilarating unstable solos with murderously focuses riffs. And Jesus, that tone… you could shave Brian Blessed with it.” – RECORD COLLECTOR MAGAZINE

4/5 STARS! “Every musician on this album brought his A game, and Re-Licked is a great listen. James Williamson has hit a home run with this one, and it’s maybe the best Stooges record yet.” – PUNK GLOBE

“Re-Licked is a kicking itself out of the garage with an intent to seek and destroy all naysayers, and along for the ride are some very special guest stars.” – ARTROCKER

“The lion’s share of Re-Licked effectively recreates what could and should have been the Stooges’ second Columbia album, at the same time – and this is the important part – as liberating the songs’ reputation from the concert environment. Some of the reworkings serve up what you’d expect, and are as great as they ought to be, too. But the real winners are the left field choices. Ariel Pink transforms the always-under-rated “She Creature of the Hollywood Hills” into a breathless slice of garage jazz fusion; Alison Mosshart’s “‘Til The End of the Night” is vividly chilled torch – not the band’s first bona fide ballad (that was probably “Gimme Danger”), but their first to sound like one, and Joe Cardamone concocts such a beautifully swaggering “Pinpoint Eyes” that you can almost hear the original Stooges cheering him on from their bar stools.” – GOLDMINE MAGAZINE

“A star-studded fuzz fest… Re-Licked rounds up vocalists from the famous to the obscure to rescue The Stooges’ mythical post-Raw Power repertory. Scruffy, in-the-red backing is suitably Stoogian, but the material is impeccable.” – UNCUT

“… gruff and propulsive” – CONSEQUENCE OF SOUND

“When you think of the sound of punk rock, real punk rock, what you hear is the sound James Williamson created in 1973 by plugging his Gibson Les Paul Custom guitar into a Vox AC30 amplifier and cranking it up until your ears bleed.” – VH1.com

“It goes without saying that the songs boast plenty of Williamson’s firebreathing guitar… he remains a riffmeister supreme. Re-Licked is as ball-busting a rock & roll record as any to come down the pike in 2014.” – BLURT MAGAZINE

“This project isn’t just a re-hashing of old material, in fact far from it. Williamson has spent over a year bringing the tracks to life and finding the right vocalist for each song with the absence of Pop.” – ABC12-TV

“These are some of the greatest rock ’n’ roll songs ever written…. as killer a rock ’n’ roll album as you’re going to hear in these days of increasingly diminished expectations.” – James Marshall / PLEASE KILL ME.com