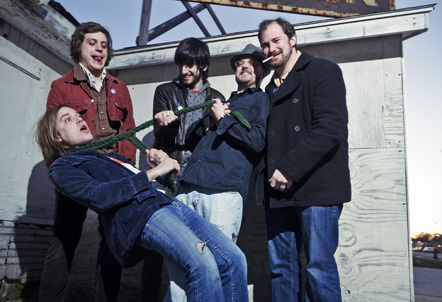 HERE’S WHAT PEOPLE HAVE BEEN SAYING ABOUT THE SIGHTS’ “LEFT OVER RIGHT” ALBUM AND THEIR RECENT LIVE SHOWS….

“Each time The Sights make a new record we say it’s their best yet. No sense straying from tradition and getting up off our knees now ’cause their new, AutoTune-free, Jim Diamond-helmed album (their seventh!), Left Over Right, is the band’s finest moment thus far. No sh*t.” – Brian Smith / METRO TIMES

“Call it garage soul, call it ragged power pop, or simply call it rock ‘n’ roll. But whatever the label, the appeal of the raucous typhoon that erupts when The Sights kick into gear is undeniable.” – KDHX RADIO: ST. LOUIS

“Detroit’s garage/power pop monsters The Sights, fronted for the past decade and a half by Eddie Baranek (guitar/vocals), have just released their seventh effort, Left Over Right, the followup to 2010’s Most of What Follows Is True. On it they deliver not only their most soulful album to date, but do it with all of the intensity that has fueled their previous recordings and live shows for well over a decade.” – BLURT

“Unlike past efforts, the new album is less bluesy and guitar-driven, and offers a more R&B-oriented sound, built around horns and keys. A garage-rock prodigy of sorts, Eddie Baranek seems to have been blessed with an uncanny ability to evoke the best work of Humble Pie, Badfinger and Mott the Hoople in his songs — often in the same tune.” – Bob Mehr / THE COMMERCIAL APPEAL: MEMPHIS

“Detroit’s The Sights do a fine job of combining garagey crunch with retro-pop melodies.” – TIME OUT NEW YORK

“Rock and roll is what The Sights continue to deliver, and their latest record, Left Over Right offers more of the same great riffs juxtaposed against the same timeless melodies Eddie Baranek continues to produce. Sharp and electric, the latest incarnation of the band is fresh off the road from a national summertime tour with Tenacious D.” – WDET RADIO

“The Sights are on a roll with their latest album Left Over Right.” – Gary Graff / THE OAKLAND PRESS

“Opening for Tenacious D is no easy task, yet The Sights rose to the occasion. With high energy and exceptional musicianship, The Sights banged out a style of rock that could be described as a clash between The Rolling Stones and Arcade Fire. If there was anything to take away from their set, it was that these guys know how to play their instruments. Guitar solos, drum solos and even a saxophone solo made an appearance in the 30 minute opening act.” – THE REBEL YELL: LAS VEGAS

“Left Over Right is a sweet collection of high-energy rock and soul from this Detroit quintet who have been pounding the pavement for some 14+ years now.” – MOTOR CITY ROCKS

“This raucous quintet proffer hooky guitar riffs and a vibrancy missing from much of the rock scene in recent years and released their seventh album, Left Over Right, on June 19th. Fans of fellow Detroit band The White Stripes will appreciate the heart-thumping tunes that lead singer Eddie Baranek and his bandmates bang out.” – Sal Christ / 303 MAGAZINE: DENVER

“Earth shaking & electrifying. Left Over Right is more cohesive and focused than their last record. And after this summer’s tour supporting Tenacious D, you can expect that The Sights will return to the studio with even greater tenacity than ever before. Not only has Eddie become a better songwriter over the years, but his band has consistently stepped up to the plate – elevating his vision of what rock n’ roll is really about.” – DAVE CHMIL MUSIC REVIEWS

“The Detroit-based band The Sights made the most of its brief opening set for Tenacious D, playing a half hour of glorious ’60s-style garage rock including “How Do You Sleep” and “Fool (I Can’t Stop Making Out with You).” – ST. LOUIS POST DISPATCH

“The Sights’ sound callbacks to the MC5 and Exile On Main Street-era Stones… satisfying. ” – DALLAS OBSERVER

“The Sights’ garage sound swaggers with influences ranging from punk to glam, blues to the Kinks to Queen.” – TULSA WORLD

“Left Over Right is a winning, layered mix of garage, pop and soul that gets better with each listen and boasts enough studio flourishes and solid craftsmanship to have plenty of appeal to the audience that pushed the latest from The Black Keys and the recent Jack White release to the top of the charts.” – LOS GRILLOS

“The Sights, led by ebullient frontman Eddie Baranek, blasted out catchy ’60s pop tracks to a warm reception. The gang seemed to have all the characteristics that Tenacious D’s Jack Black & Kyle Gass champion: energy, good humor, and a sincere desire to rock.” – SAN FRANCISCO WEEKLY

“Detroit’s former boy wonders, The Sights are back with a new one. And all’s just a little more right with the power pop world. Well, it’s not entirely, or only, power pop – the band has a strong soul influence, with a bit of hard rock to it as well. In any case, Left Over Right is a five-man life force, it’s so full of irresistible hooks, ‘60s-inspired songwriting, and passionate rock ‘n’ roll affection. Doesn’t look like Baranek & Co. are likely to run out of ideas any time soon.” – Mary Leary / DAGGER

“On The Sights’ Left Over Right the sound creeps forward to visit late ’60s/early ’70s classic rock, decorative bits of psychedelia, and even folk rock. There are so many whispered influences (The Animals, Badfinger, Bowie, The Band) that it’s not so much a tribute as a long comfortable soak in a bygone era. A great album.” – JESTER JAY MUSIC

“This album is their best yet.” – Yuliya Harris / AFTER 5 DETROIT

“These Motor City soul/garage/blues rockers just wrapped up the recording sessions for Left Over Right, which could fit just as comfortably alongside The Band, Solomon Burke or Bob Seger, packing plenty of pop sensibility at every turn.” – Andy Argyrakis / CONCERTLIVEWIRE

“If this doesn’t sound like a rock & roll party, we don’t know what does.” – Mike Newman / EAST VILLAGE RADIO’S BEYOND BEYOND IS BEYOND

“About midway through the opening set by Detroit’s The Sights you could close your eyes and just about be at the Fillmore in 1971 watching Humble Pie. In fact, if you squinted at the stage at diminutive frontman Eddie Baranek’s direction as he leaped about the stage, attacking his hollowbody Gibson, you might’ve just thought the ghost of Steve Marriott was in the house… and that’s no mean trick.” – NYC EXAMINER

“The Sights are a band out of the Motor City that delivers pop heavy tunes infused with the right amount of fuzz and soul. Longtime critical darlings, their 14 year career has yielded multiple albums full of musical nuggets that scream DETROIT! Their latest album, Left Over Right, is a whole lot more of the same. From start to finish the music employs the soulfulness of Motown, the frantic energy of the MC5 and catchy lyrics to create a musical environment for the listener to enjoy.” – ATLANTA EXAMINER

“Left Over Right is the perfect album to give the person in your life who complains that they don’t make bands like they used to anymore.” – MIDNIGHT TO SIX

“This album is a solid offering and showcases that what The Sights do, they do very well.” – CULTURE BRATS

“These songs show the band growing into a true R&B machine, mixing southern horns into guitars that continue to roar with a Motor City ferocity. Baranek delivers his vocals with the abandon of a preacher about to slip into tongues as he channels his spirited tales to lay along the walls of organ-flecked pandemonium underneath. The Sights have always been a great live band. And their albums always showed they were capable of delivering solid studio work. But Left Over Right shows that the band has finally wrassled that live fervor and captured it down to tape to reveal their full potential. And a more potent result we couldn’t have asked for.” – CHICAGOIST