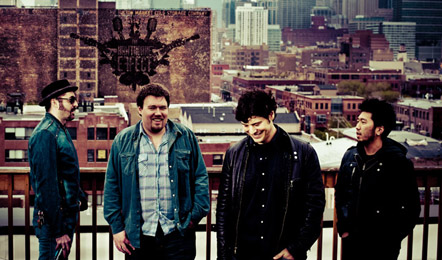 The Hawthorne Effect is the phenomenon by which knowing one is being observed affects one’s behavior. Every day we are watched by eyes in the sky, by computers and cell phones, by others around us, and by estranged parts hidden deep within, alternate identities within our very selves. This knowing is part of our reality and this reality is now.

The Hawthorne Effect is also a four-piece rock band from Chicago. The name implies depth and the songs on their full-length debut, Awakefulsleep, reflect the name. Each song has been carefully crafted from beginning to end, not only rich with layers of meaning, but with layers of melody and musical sensibility. It’s where simplicity meets the source. What we know and don’t speak of; what we see and often forget. The songs are about the general and the specific, serving as projective tests that allow the listener to generate multiple meanings, while packaged neatly inside a well straightforward simple message as well.

The songs were written by the band’s creative fountainhead John Jauch (Smoke Off Vinyl/Killing the Enemy), who has been an active member of the Chicago music scene for the last decade and has had his music featured on television and radio programs across the globe.

All the songs on Awakefulsleep were tracked, arranged, mixed, and mastered at Stranded On A Planet recording studio in Chicago, under the technical and musical prowess of producer Scott Fritz (Nadia Ali, Martha Berner, Cavalier King) and features the talents of several studio musicians: including Fritz, William Sprawls, Tyson Ellert, and Bethany Fritz.

The album is a roller-coaster of emotion and reflects the differing sides of the human experience not only through lyrics, but also in sound. Addiction, oppression and mortality are just a few of the topics touched upon in this ten song soundtrack of lives that is unclassifiable as a whole, yet still somehow hauntingly familiar.

The Hawthorne Effect will release their full-length debut album Awakefulsleep on July 10th through Red Mist Records, and will be available in CD and Digital formats.

THE HAWTHORNE EFFECT’S TOUR DATES TO BE ANNOUNCED SOON