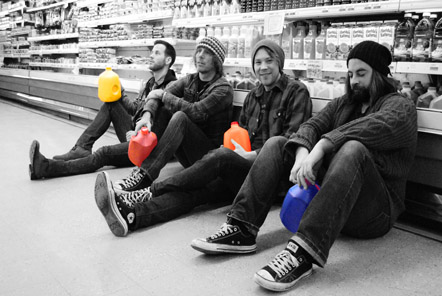 “Milwaukee’s Delta Routine can rock the blues and deliver grade-A hooks just as well as any of its contemporaries. It’s no wonder they’ve been receiving plenty of accolades in their hometown” – MAGNET MAGAZINE

“On its third full-length album, Cigarettes & Caffeine Nightmares, Milwaukee’s The Delta Routine once again assume the tired-and-true rock stance by mining the classic, guitar-driven treasures of the past. Singer-songwriter Nick Amadeus injects a bluesy swagger into the proceedings, while his band does its best to summon up the hard-living, pre-gentrified ghosts of a mid-’70s CBGB. The good news is that they pull it off—the album is a big step up from 2011’s More About You.” – Matt Wild / THE ONION’S A.V. CLUB

“The Delta Routine ups the ante on their new full-length Cigarettes & Caffeine Nightmares, an album that finds the band hitting their stride like never before.” – Joshua Miller / SHEPHERD EXPRESS

“I won’t waste your time now,” Delta Routine frontman Nick Amadeus sings with his Liam Gallagher-esque vocals on the opening track. He’s true to his word. At 32 minutes, the album is mercifully low on fat but thrills all the same with warped organ and guitar reverb snarls on “Switchblade.” Likewise, “Around Your Neck” does its bluesy, White Stripes-like, swagger-soaked thing in less than two minutes’ time.”  – Piet Levy / JOURNAL SENTINEL

“The Delta Routine blend catchy guitar pop with swaggering blues-rooted rock-and-roll that nods at The Black Crowes, The Who and The Rolling Stones.” – Bobby Tanzilo / ON MILWAUKEE

“The Delta Routine continue to maintain their fun, distinctive sound while supplying us with fresh new hits to dance to on their third full-length record, Cigarettes and Caffeine Nightmares. – LOCAL PLAYLIST

HERE’S WHAT PEOPLE HAVE BEEN SAYING ABOUT HERO JR.:

“Rock at its finest.” – METROMIX INDIANAPOLIS

“Hero Jr.’s full-length debut Backup Plan is a refreshing change of sound, mixing up a bit of classic and ’90s rock and expanding on the raw power of groups like Mother Love Bone in their heyday.” – INSOMNIA RADIO

“Hero Jr. have a sound that’s unmistakably U.S. rock. You get the feeling they could have released their single “Ann Boleyn” any time from the last forty years and it’d stand a chance at college radio airplay and southern cook-outs, yet it manages to have just enough freshness to get played here in the U.K.” – SUPAJAM/UK

“The music Hero Jr. brings on Backup Plan is worth some serious exploration. Lead singer Evan Haughey is gifted with magnificent pipes, his vocals soaring over a guitar-heavy alternative groove which reminds instantly of a cross between nineties-era Tonic and pretty much anything by the Black Crowes or Cracker.” – HEAR HEAR MUSIC

[5 out of 5] “Hero Jr.’s high energy, hook driven rock-and-roll comes through in waves with their debut studio album, Backup Plan.” – THE RIPPLE EFFECT

“Hero Jr.’s album is a polished survey of modern rock that isn’t too quirky or too brutish to turn off mainstream listeners. Lead singer, Evan Haughey, sounds like Kings of Leon

front man Caleb Followill when he’s worked up and going for broke. Hero Jr. has everything in its right place. Haughey’s guitar licks, which range from gritty to artfully restrained, sound great, and his voice is radio-ready.” – David Lindquist / INDIANAPOLIS STAR

YOU CAN ALSO CHECK OUT A NUMBER OF OTHER NEW HERO JR. UNPLUGGED VIDEOS HERE

FOR MORE INFO ON THE DELTA ROUTINE:
http://www.thedeltaroutine.com