THE BLOODY HOLLIES IN BLURT MAGAZINE 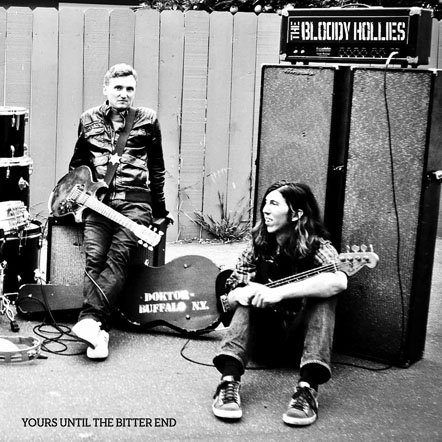 The Bloody Hollies -Yours Until the Bitter End (Alive)

Raised in the upper Rust Belt region of Buffalo, NY, and polishing their chops in that struggling metropolis, the Bloody Hollies eventually moved westward about half a decade ago, (logistically, about as far as one can go continentally), to thaw out in San Diego. Their music is born of a head-banging fury so often found in bands that emerge from the Great Lake post-industrial cities like Detroit and Cleveland. It reaches a needle-pinning ferocity bred from ‘70s rock, punk, garage and blues crammed into a vessel and shaken viciously. Lead singer Wesley Doyle screams and yowls his vocals with a voice that might be described by invoking the names of several metal bands, a bit of Rod Stewart’s hoarse scream, or pitch-on Roky Erickson’s grating bawl about a “Two Headed Dog.”

On the first two numbers of this album, “So Grey, So Green” and “Dead Letter,” the guitar attack is as heavy and relentless as a terrier ripping ferociously into a large rat, with the organ grounding the music to keep one foot firmly planted in garage and blues. “Dirty Sex” involves Joseph Horgen’s versatile slide-guitar work, helping whip things into a more bluesy frenzy. Doyle’s vocals take over “Good Night, Sleep Tight” making for a metal-blues nut crusher, but makes room for a violin solo that follows a flashy guitar break. While much of the album hits the velocity of “Communication Breakdown,” the guys slow it down just a bit on “Leave That Woman Alone,” a tune that has an almost Baltic melody that recalls, in parts, Dave Edmunds’ famous cover of “Sabre Dance.” Again, their song structure changes for “Sticks and Stones,” sounding for all the world like Slim Cessna’s Auto Club in full gospel-rock mania mode. More intensity erupts on “You’re So Cold,” a solid, in-your-face song if there ever was one.  Expending all that energy to record this album must have worn them out a bit, as the last song, “John Wayne Brown” seems to settle down out on the back porch for a straight-ahead gospel blues number, a la Holly Golightly and the Brokeoffs, handclaps, slippery slide-guitar and all. It even borrows a rustic riff from “Wildwood Flower” and inserts it for a little extra authenticity.

The Bloody Hollies may not be a household name yet, at least a rock household, like say, Dinosaur Jr but they’ve got a solid body of work behind them, even being invited at one point to do John Peel’s famous Peel Sessions radio show on BBC. Not too shabby for a rumpled pack of Rust Belt rockers! They’ve even managed to stand out from the myriad mob of bands at a SXSW appearance, no easy feat. Yours Until the Bitter End continues their blitz und donner power-surge legacy and shows no sign of letting up. Where some bands that I could name start off their recording career with fast and furious insanity, only to rein it in a few albums later, I trust the Bloody Hollies to stay true to their raucous tradition that embraces dense, brutal, gut-punching rock and roll until the bitter end.