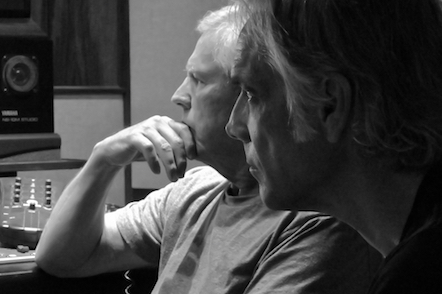 Track of the Day: ‘Penetration’ by Deniz Tek and James Williamson

by David A. Graham

What happens if you take Raw Power and rip it out of the socket? That’s the landmark 1973 album from the Stooges, a fierce burst of electric guitar that prefigured punk and hard rock.

But guitarist James Williamson, who wrote the songs with Iggy Pop, actually composed the guitar parts without amplification. “We were in a little mews house in London and you couldn’t be loud in there anyway, so I used acoustic to write the songs,” Williamson told me this week. “I got so I liked it better because you can really hear the notes really well.” The reason for his preference is even a little punk: “Sometimes the electric doesn’t have the same kind of punch that acoustic does. Acoustic is a little bit percussive, and sometimes the electric has the big sound, but it isn’t always as percussive.” (There are also some acoustic guitars on the David Bowie-produced record, notably on “Gimme Danger.”)

What would those classic songs sound like played unplugged? There’s no need to wonder, because on a new EP, Williamson teamed up Deniz Tek, the singer and guitarist in Radio Birdman and the Visitors, to record a handful of acoustic versions of songs Williamson wrote with Iggy Pop, including “Penetration.” Here’s the premiere of that track:

Acoustic K.O. (the name is a joke on the live Stooges release Metallic K.O.) also includes “I Need Somebody” from Raw Power as well as “Night Theme” and “No Sense of Crime” from the 1977 Pop/Williamson album Kill City, the former of which gets a full orchestration.

Williamson said the new EP represented the confluence of a couple currents. A Stooges superfan named Hakan Beckman (“He kinda knows what I had for breakfast in 1970,” Williamson chuckled) had long advocated for an acoustic record, and the duo of aging rockers Williamson and Tek decided to to do it after joking about playing lounge gigs together.

On “Penetration,” Williamson laid down an acoustic guitar part as well as some licks on Weissenborn lap slide. The recording process went a lot more smoothly than Raw Power. “At this point in time I think we have a clue as to what to do, and back in the day, that was my first album on Raw Power, so I had no idea what I was doing,” he said. The only hitch came when he sent his tracks to Tek, who discovered they were out of concert pitch, thanks to a miscalibrated electronic tuner. It was an easy fix, though. Plus, the weird tuning was an echo of the way the Stooges did things: Eschewing tuners, they just tuned to each other’s instruments.

Williamson said he hasn’t talked to Pop about the new version. “I doubt if he cares. It’s just another version,” he said. But Williamson likes the way it compares to the 44-year-old original. “I think it stacks up very favorably. The original of course is the original. This one has more of a rhythmic thing going on with it.”