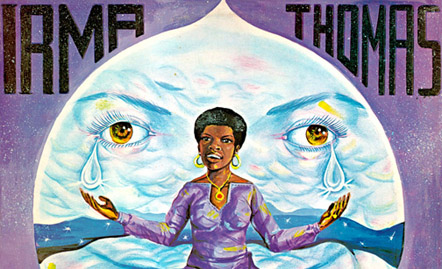 “Irma Thomas’ In Between Tears is a lost classic that captures deep soul at its most poignant and resonant, couching Thomas’ deeply affecting vocals in earthy arrangements that emphasize the singer’s gospel roots.” – AMG

Produced by legendary soul singer / songwriter / producer Jerry Williams Jr., aka Swamp Dogg, and featuring Duane Allman on two songs, Irma Thomas’ In Between Tears is finally back on vinyl with its original cover for the first time since 1973. The CD and digital versions include the Canyon single (“We Won’t Be In Your Way Anymore” / “I’ll Do It All Over You”) as bonus tracks. The CD also includes newly penned liner notes by Swamp Dogg. In Between Tears will be available in all formats on May 14th. Color vinyl exclusive to Bomp-mailorder.

IN BETWEEN TEARS TRACK LISTING:

4.  Whats So Wrong With You Loving Me

6.  Medley: Coming From Behind (Monologue)

7.  Wish Someone Would Care

8.  Turn My World Around

Re-released for the first time on vinyl since its original release in 1973!

“Ivan Olander’s drums, Little Beaver’s guitar, even the horns of the Swamp Dogg Band maintain a fierce momentum that’s not conventional at all.” – Robert Christgau (Dean Of American Rock Critics)

Swamp Dogg’s Gag A Maggot was recorded at TK in Miami with an all-star cast. The CD and digital versions feature two unreleased bonus tracks recorded live at KSAN radio in 1972 (“Mamas Baby, Daddy’s Maybe” and “Honky Tonk Woman”). The CD booklet also includes new liner notes and rare photos. The song “Choking To Death (From The Ties That Bind)” was recorded by Canned Heat in 1974. Gag A Maggott will be available in all formats on May 14th. Color vinyl exclusive to Bomp-mailorder.

2. Choking To Death (From The Ties That Bind)

3.  I Couldn’t Pay For What I Got Last Night

6.  Please Let Me Kiss You Goodbye

9.  Plastered To The Wall (Higher Than The Ceiling)

HERE’S WHAT PEOPLE HAVE BEEN SAYING ABOUT SWAMP DOGG’S RECENTLY RE-ISSUED & REMASTERED VERSIONS OF HIS EARLY ’70S SOUL CLASSICS TOTAL DESTRUCTION TO YOUR MIND & RAT ON!:

Every man should listen to Swamp Dogg. – ESQUIRE