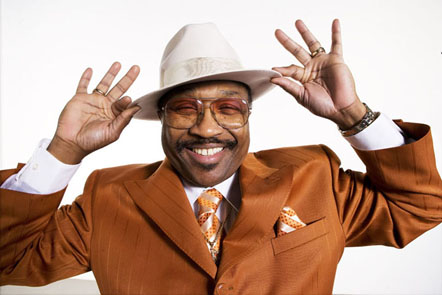 Swamp Dogg (aka Jerry Williams) has been enjoying a renaissance in his musical career this year, thanks to Alive Naturalsound Records’ ongoing Swamp Dogg Soul & Blues Collection. Critics and fans alike have been singing the praises of these highly sought-after and long out-of-print rarities, all remastered and available on vinyl for the first time in decades. This collection, thus far, includes Swamp’s first three solo records, Total Destruction To Your Mind, Rat On! and Gag A Maggott, as well as the Swamp Dogg-produced albums In Between Tears from the ‘Soul Queen of New Orleans’ Irma Thomas, Charlie Whitehead‘s Raw Spitt and Lightnin’ Slim‘s High & Low Down. In addition, Alive will also be releasing remastered versions of the Swamp-produced LPs Too Many People In One Bed from Sandra Phillips and Wolfmoon‘s long-lost 1969 self-titled album this fall, followed by some additional surprises guaranteed to please fans of R&B, soul and funk.

HERE’S WHAT PEOPLE HAVE BEEN SAYING ABOUT SWAMP DOGG’S RECENTLY RE-ISSUED & REMASTERED VERSIONS OF HIS EARLY ’70S SOUL CLASSICS TOTAL DESTRUCTION TO YOUR MIND, RAT ON! & GAG A MAGGOTT:

Swamp Dogg’s “Mama’s Baby, Daddy’s Maybe” is a song every man should llsten to. – ESQUIRE MAGAZINE

Swamp Dogg’s early ’70s reissues Total Destruction To Your Mind and Rat On! bring the soul in a big way.  – POPMATTERS

Swamp Dogg turns out a heady mix of soul, funk, R&B, rock and roll each powered by a dynamite horn section. As a vocalist, Dogg simply crackles with life, excitement and pure joy. – GHETTOBLASTER MAGAZINE

On Gag a Maggot Swamp Dogg has the classic chill factor down in his Soul. – THE ALTERNATE ROOT

The title track, Total Destruction To Your Mind, is a slam-bangin’ chunk of rock and funk that’s pushed by a great session band including guitarist Jesse Carr and drummer Johnny Sandlin, and is easily Dogg’s finest moment on record. But the rest of this is great too, ranging from the consumer nightmare “Synthetic World” to the paternity blues of “Mama’s Baby, Daddy’s Maybe.” Plus, Dogg is a great singer, and his dizzying range gets a workout on these songs. – ALL MUSIC