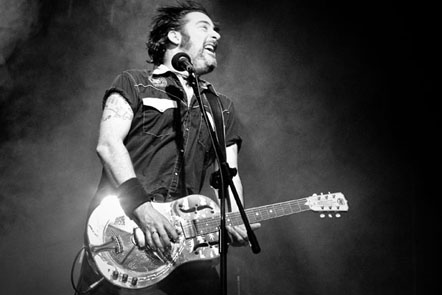 “Dave plays like he got his skin turned inside out and pretty soon my skin was inside out too listening and it was all good. That boy bleeds for you – he’s a real down deep player and a soul man…” – SEASICK STEVE

Glasgow-based blues musician Dave Arcari will be releasing his fifth studio album, Whisky In My Blood, worldwide March 25th. On it, the slide guitarist & songwriter turns in 14 tracks that owe as much to trash country, punk and rockabilly as they do pre-war Delta blues. Arcari is joined by his backing band The Hellsinki Hellraisers, featuring Finnish musicians Juuso Haapasalo (upright & electric bass) and Honey Aaltonen (snare drum, cymbal, rub-board). Melding the rural sounds of the Deep South with a hint of folk music that emerged from the British Isles over a century ago, Arcari & Co. manage to update these age-old sounds into an energetic and often bone-chilling new modern take on the blues.

Whisky In My Blood features three cover songs – two from Robert Johnson (“Traveling Riverside Blues” & “Preachin’ Blues”) and one from Bukka White (“Jitterbug Swing”). The remaining 11 tracks were all composed by Arcari and showcase his ability at crafting equally timeless songs that sit comfortably next to the blues masters he covers.

Performing more than 100 UK dates a year, as well as regular shows in Finland, Estonia, France, Germany, Belgium, Poland and Ireland, Arcari is one of the hardest gigging live artists on the circuit. In addition, he’s performed at numerous music festivals around the globe, including appearances at Glastonbury (UK), BluesAlive (Czech Republic & Poland shows), Moulin Blues (Netherlands), The Great British R&B Festival, Peer Festival (Belgium) and NXNE (Toronto), among others. Notable performances opening for music legends such as Steve Earle, Alabama 3, Seasick Steve, Toby Keith and Jon Spencer, along with his relentless tour schedule has established Arcari as a formidable international solo performer who, with his hard-hitting gravel-laden voice and slashing bottleneck steel guitar, is quickly building a reputation with media and fans alike as a ‘hell-raising National guitar madman’.

Dave Arcari & The Hellsinki Hellraiser’s Whisky In My Blood will be available March 25th on CD, digital and limited edition colored vinyl.

Whisky In My Blood track listing:

1. Whisky in my Blood (Dave Arcari)

8. Wherever I Go (Dave Arcari)