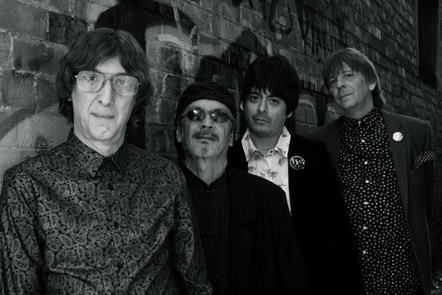 Although they were fairly inactive in the Nineties and 2000s, the Flamin’ Groovies have reformed with founding member Cyril Jordan, early member George Alexander and mid-period Groovie Chris Wilson. The band played a few shows this year, including stints in Japan and Australia, and now they’re headed out on a North American tour.

The tour precedes a new six-song EP due out in early 2014. “End of the World,” the first song from the release, is the first Jordan/Wilson penned tracked in over 30 years, and it picks up where they left off. “The song came together in the studio,” says Jordan. “The basic track was cut 20 minutes after I showed it to the guys. This was the way we cut originals in the past.”

“End of the World,” like the band’s best tracks, blends proto-punk energy with power-pop melody. A certain rawness permeates the band’s dedication to pop rhythm, making it sound like it could have been recorded today or in 1972. Considering all the bands that have been influenced by the Groovies, this music is timeless.
http://www.rollingstone.com/music/news/flamin-groovies-at-the-end-of-the-world-song-premiere-20131105