ROLLING STONE PREMIERES JOHN THE CONQUEROR’S NEW SONG “WAKING UP TO YOU”! 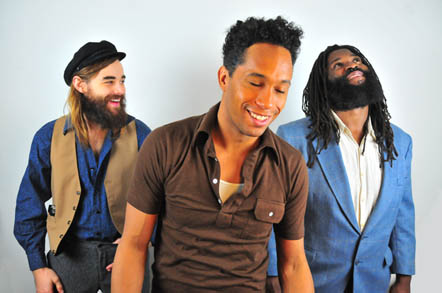 CLICK HERE TO LISTEN TO “WAKING UP TO YOU” VIA ROLLING STONE!

PHILLY-BASED BLUES-ROCK TRIO TO EMBARK ON EUROPEAN WINTER TOUR FOLLOWED BY U.S. DATES IN THE SPRING

06 Burn Down The Cornfield

HERE’S WHAT PEOPLE HAVE BEEN SAYING ABOUT JOHN THE CONQUEROR:

“John the Conqueror’s raw, bluesy old-school soul track “Time To Go” is just one of many gems on the Philadelphia trio’s self-titled debut album.” – USA TODAY

Sounds like the work of a supergroup power trio made up of three vets who just wanted to get together and lay it down, making gutsy, raw, bluesy music for the sheer joy of it. The fact that this is the first time in a studio for the members of this band is mind-blowing. –  JAMBANDS/RELIX

“Heavily influenced by blues musicians that Moore and Gardner grew up with in Jackson, MS, John The Conqueror provide a raw, honest edge that truly sets them apart from other bands. It doesn’t matter if they’re jamming hard or slowing things down, there’s so much soul you simply feel throughout the album. I’d say for a debut, this is pretty damn impressive.” – 215 MAGAZINE

“Power trio John the Conqueror has made a splash in Philly scene over the past year, dishing out a moving blend of blues, soul and rock n’ roll… The swaggery trio might be Philly’s answer to Gary Clark Jr.” – WXPN’s THE KEY

“A fine punk-blues rock record that sounds like The Jon Spencer Blues Explosion if JSBX were from the Mississippi Delta. It’s all smokestacks, greasy ball bearings, mudslides, and corn liquor swilled from mason jars; raggedly scorching guitar riffs, a thunderous rhythm section, and howled vocals. A hell of an impressive debut.”  – HAPPENING! MAGAZINE

“This self-titled debut album from Philadelphia trio John the Conqueror is a solid output of blues and rock n’ roll.  The vocals and guitar playing of Pierre Moore are impressive in their own right, but along with bassist Ryan Lynn and drummer Michael Gardner, the band’s sound really grooves together nicely. It’s not really fair to compare these guys with veteran groups like the Black Keys or the White Stripes, but John the Conqueror prove on their first album that they have noteworthy chops.” – SLUG MAGAZINE

“The trio from Mississippi, now based in Philly, have the smoothness of classic ’50s soul mixed with a southern twang. Named after an African-American mythological folk legend, of whom the likes of Dr. John, Muddy Waters, and Willie Dixon have sung, the band possesses a magical power that empowers emotion.”  – KNUCKLE RUMBLER

“They will bring you from the church to the juke joint in four quick minutes.” – MADD CHICAGO

“John the Conqueror’s trademark sound is based around laid back, loose funky blues riffs, laconic drumming, and succinct song writing that takes less than a minute to fall in love with.” – SKRBBLR

“John The Conqueror are an amazing young band on the verge of greatness.. Born in the Delta of Mississippi, and currently based in Philadelphia, the trio blends a totally unique mix of blues and rock, with equal amounts of Robert Johnson and Queens of the Stone Age.” – BLOG TALK RADIO

“Is there a category of music called Hard-Arse Soul? J the C has nailed it. The 10 tracks here bristle with surly attitude that I’m told living in the City of Brotherly Love can bring on. Pierre Moore’s smoothly assured vocal echoes with a tinge of menace. Bass-man Ryan Lynn is the local guy who lays down a fine and fluid rumble, while Pierre’s cuzz Michael Gardner delivers the requisite backbeat laden with wrecking ball swing.” – I94 BAR

“If you remember what you’ve always liked about rock music that hews close to the blues and soul traditions, you will be well-disposed to enjoy what John The Conqueror is doing. There’s also a punk influence, best heard on stuff like the fast guitar intro to ‘Say What You Want.’ which is a 2:25 rant that keeps a high energy level throughout.” – WHEN YOU MOTOR AWAY

“This gritty, sexy, blues-infused rock album is not to be missed.” – LOCAL PLAYLIST: MILWAUKEE