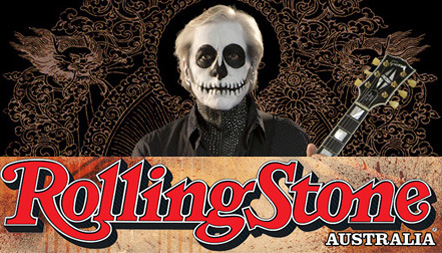 James Williamson’s involvement with The Stooges began towards the end of 1970 when the band enlisted him as a second guitarist, but it was on their seminal 1973 release, Raw Power, where he became an integral part of the group’s configuration, writing and composing the album alongside Iggy Pop. After the release of the iconic record, Iggy and Williamson began work on a follow-up. Those tracks, although finding their way onto bootleg recordings over the years, were never officially released. Until now. Brand new versions of these songs — initially written and demoed in 1973/74 — have been recorded, with Williamson enlisting a wide range of guests to help out, including Jello Biafra, Mark Lanegan, Alison Mosshart, Ariel Pink, The Orwell’s Mario Cuomo, The BellRays’ Lisa Kekaula, Primal Scream’s Bobby Gillespie, The Icarus Line’s Joe Cardamone and Carolyn Wonderland. The album, entitled Re-Licked, will be released on vinyl and CD, packaged together with a 24-page booklet of liner notes and photos, as well as a special ‘making-of’ documentary DVD. Re-Licked will be released worldwide tomorrow (October 29), but available to preview right now via the exclusive stream below: http://rollingstoneaus.com/music/post/premiere-james-williamson-re-licked-album-stream/773