RELIX PREMIERES BUFFALO KILLERS’ NEW SONG “GET IT” AS A FREE DOWNLOAD! 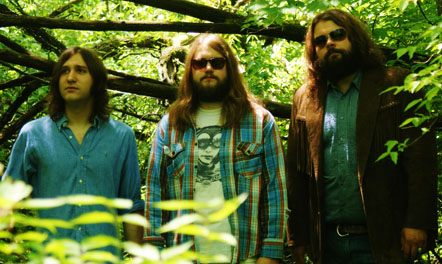 On Buffalo Killers‘ fourth full-length effort Dig. Sow. Love. Grow. the Ohio-based trio have created an album that stampedes with the ferocity of their first two albums (the Dan Auerbach-produced Let It Ride from 2008 and their self-titled debut from two years prior), yet it also incorporates much of the loose, organic nature from last year’s highly-praised album 3.

Dig. Sow. Love. Grow. is a heady synthesis of not only their own previous efforts, but also the many unique styles of music cultivated on American soil over the last five decades. From late ’60s psychedelia, blues, Americana, garage rock and the folk-rock sounds that rolled out of Laurel Canyon in the early ’70s like a sweet cloud of Acapulco Gold, brothers Zachary and Andrew Gabbard along with Joseph Sebaali have brought them all together to create an intoxicating album that sounds as timeless as it does remarkably fresh… and quite unlike anything else being released today.

Buffalo Killers have toured extensively with greats such as The Black Crowes, The Black Keys and, more recently, North Mississippi Allstars, and will be announcing tour dates shortly in support of Dig. Sow. Love. Grow.

Dig. Sow. Love. Grow. is set for release on August 7, 2012 through Alive Naturalsound Records and will be available in CD and Digital formats, as well as 300 Limited Edition Orange Vinyl LPs exclusive to mailorders through Bomp!

Relix is featuring the world premiere of Buffalo Killers’ new track “Get It” from Dig. Sow. Love. Grow. Click here to check it out… and to download the song for free!

“Buffalo Killers’ 3 finds this band easing into an comfortable but deep groove, and not many bands have mined a late hippie-era approach with more satisfying results.” – Mark Deming / ALL MUSIC