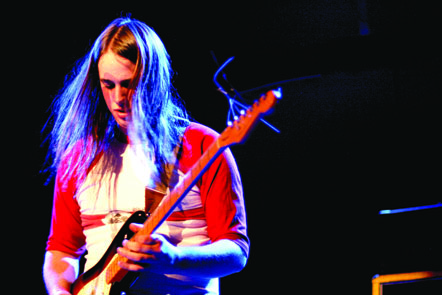 Thursday night was a good evening to be stoned in Manhattan. That is if you were lucky enough to be at the sold out Graveyard and Radio Moscow show taking place at The Bowery Ballroom. The opening night of the month long tour found New York’s stoner rock community out in full force, and the anticipation could be felt from the moment doors opened. Daniel Davies of Year Long Disaster opened the show with his solo band that consisted of CKY’s rhythm section, Jess Margera and Matt Janaitis. The music was enjoyable but nothing particularly impressive or memorable, instead offering a familiar stoner rock sound to help set the mood for the evening while the crowd began filling in.

Radio Moscow took the stage next, mere days after a highly publicized on stage melt down between the trio that involved former drummer Cory Berry hurling Peter Griggs’ guitar right into his head, splitting it wide open in the process. You can read more about the melee and see footage HERE. Griggs was rushed to the hospital to receive stitches, and the band has since reformed with a new bassist and drummer in the wake of the turmoil. Sporting his lengthy new scar, none of this week’s trauma seemed to effect Griggs, as it’s always been clear where the heart and soul of Radio Moscow lies. Having played together for a total of three days, the band blazed through tracks from their latest offering The Great Escape of Leslie Magnafuzz and the stellar Brain Cycles. The band’s music offers blues licks and rhythms delivered at their dirtiest and most raw. Griggs’ guitar work is on a level entirely his own as he soars through riff after riff of explosive blues tinged noise running the length of the fretboard and back again.

Opening with the dissonant “Luckydutch” from their self-titled debut, the band quickly pulled out fan favorite “Broke Down” with its stomping Black Sabbath inspired dirge and distorted blues licks. Think The Black Keys without the studio gloss or J Mascis with an intense interest in stoner blues rather than indie guitar rock and you can begin to imagine the passion and talent Griggs possesses. “Densaflorativa” followed with it’s psychedelic flourishes and squealing solo as the other members joined in on percussion with a seated bongo performance from new bassist Billy Ellsworth. The guitar heroics quickly returned on “The Escape” and “Black Boot,” the later a stomping swampy blues instrumental with stunning slide guitar work that’d make Jimmy Page proud.

The guys continued their onslaught of guitar fury jams with “Deep Blue Sea,” the rowdy hollering “Speed Freak,” and the down home front porch blues of “Creepin,” before ending the set with a blistering extended version of the slow burning “250 Miles”. Griggs used the final hoorah as a chance to blow the minds of anyone in the audience yet to drop their jaws, and he accomplished just that. The song opens with a calm blues lick that explodes and never looks back in the wake of its destruction. This has always been Griggs’ band, and the fact that Radio Moscow sounded as triumphant as they did with only three days of practice for the two new members is a testament to his vision and stunning guitar work.

Graveyard hail from Gothernburg, Sweden and have become one of stoner rock’s greatest hopes over the past few years since releasing their debut album in 2007. The band are as retro as can be, reviving the sound and look of the early 70’s in an intense time-warp fashion. The quartet opened with my personal favorite “Blue Soul,” a smoky blues folk freakout that permeates slowly under the grooving guitar line before picking up with lead vocalist Joakim Nilsson’s pristine howl. His voice takes center stage in the mix, and is hard to deny as it controls the aggressive peaks and soul of their sound. The band played a majority of last year’s Hisingen Blues including “Buying Truth,” “Ain’t Fit To Leave Here,” “Ungrateful Are The Dead,” “Hisingen Blues,” “The Siren” as well as b-side “Granny and Davis”, mixing them with early album highlights “Thin Line,” “Satan’s Finest” and fan favorite “Evil Ways”.