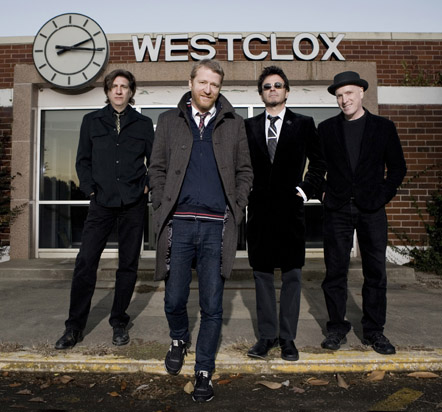 The second annual Campout East music festival, hosted by alt-rockers Cracker, will roll into Buena Vista on Friday for a two-night rock ‘n’ roll show complete with its own pancake breakfast and kickball tournament.

“I grew up with a guy that struck out at kickball,” Southern Culture On The Skids’ guitarist Rick Miller says with a laugh. “That’s pretty tough.”

Southern Culture On The Skids will join Cracker at the all-ages festival, which also features the Dexter Romweber Duo, Carl Anderson, Radiolucent, 7Horse and Joe Fletcher & The Wrong Reasons.

Cracker frontman David Lowery says Campout East gives the band an opportunity to gather friends, family and fans who have stuck with them during their more than 20 years in the music business.

“It’s our Star Trek convention, where people who’ve been fans of the band for a long time sort of reconnect with each other,” he says. “It’s very informal.”

Lowery, along with guitarist Johnny Hickman, drummer Frank Funaro and bassist Sal Maida, have long-standing ties in the Richmond area. After seven successful years of their popular Campout West in California, they decided after that Central Virginia was a perfect place for another festival.

Cracker will headline both nights, and Lowery says putting on their own event means the band can play whatever they want, for as long as they want.

“Sometimes when you’re out touring, you’re limited to the amount of songs you can play,” he says. “But we’re going to do at least an hour and 40 [minutes] each night.”

With nine studio albums under its belt, Cracker is no stranger to mammoth shows and endless amounts of touring. The band’s unique blend of Americana, country and classic rock has helped co-founders Lowery and Hickman continue to grow an already loyal fanbase.

When Cracker hit its stride during the 1990s, songs like “Low” and “Euro Trash Girl” (from the album “Kerosene Hat”) were lighting up rock-radio dials around the country, eventually earning the band platinum record status.

But Lowery says people have yet to stop listening.

“Our best weapon is our fans,” he says. “They’re the ones that keep us popular and keep us relevant and turn new people on to us. That’s what these [festivals] are kind of about.”

And the Campout lineup should be enough to entertain, from Southern Culture On The Skids’ hybrid of surf, R&B and rockabilly to the folk-rock sensibilities of Radiolucent to 7Horse’s mix of cosmic country and dirty blues.

Miller and his bandmates — drummer Dave Hartman and bassist-singer Mary Huff — have been throwing what The Rolling Stone dubbed “a hell-raising rock and roll party” for nearly three decades.

He says the band has survived the changing tides of the music industry by maintaining a certain perspective.

“The key to our success is the lack of it,” he says. “Success to me was the day I quit my day job. I’m having as much fun as I’ve ever had.”
See them live
WHAT: Campout East, featuring Cracker, Southern Culture On The Skids and friends
WHERE: Glen Maury Park; 101 Maury River Dr., Buena Vista
WHEN: Doors open at 5:00 p.m. Friday
TICKETS: $25 per day for adults and free for children 12 and younger (it costs an additional $50 for camping Friday and Saturday night)
INFO: Campout East’s website
http://www2.the-burg.com/entertainment/2012/may/31/alt-rockers-cracker-headlining-campout-east-music–ar-1953563/

David Lowery wears many musical hats. He’s best known as the front man of Cracker—the popular alt-rock outfit that hit it big back in the early ‘90s with the platinum-selling album Kerosene Hat. But Lowery’s reach in the business is much greater than Cracker’s ubiquitous radio hits like “Low” and “Get Off This.”
Before Cracker, he founded indie punk pioneers Camper Van Beethoven, and as a producer he’s helmed records by Counting Crows, Sparklehorse and, most recently, local country rock heroes Sons of Bill. He’s also started teaching a music business class at the University of Georgia.
This weekend, though, Lowery will act as festival curator, as he brings Campout East back to the region for two days of music at Glen Maury Park in Buena Vista. The event—an offshoot of Lowery’s long-standing Campout Festival held in California—is relocating from its debut last year at Misty Mountain Camp Resort in Crozet. In addition to two nights of Cracker, the line-up includes Southern Culture on the Skids, the Dexter Romweber Duo, Carl Anderson and Radiolucent.

C-Ville: Everyone has his or her own idea of what makes a good festival. What’s your vision with Campout East?
David Lowery: “For a longtime we’ve done the Campout Festival in California, and we wanted to bring it east since Cracker has a lot of roots in Virginia. This festival is about giving back to our fans. It’s doing something for the core group that has followed our family of bands and given me a 25-year-plus career. We’re getting our community together in one place to hang out. I’m sorry we had to move it a little further away from Charlottesville, but I think people are going to like the new location. It rained a lot last year, so we’ll have a covered stage with a nice little spot next to the river [Maury River].”

Tell me about some of the bands you decided to include this year.
“All of the Campout events are meant to highlight bands that fall into the Cracker and Camper Van Beethoven family. It’s generally groups that are related to my bands or side projects. Southern Culture on the Skids is a band I’ve played many shows with, going back to my dabbling with FSK. Radiolucent is an Athens, Georgia band that I just happen to love. They’re really young kids that grew up on Whiskeytown and the Drive-By Truckers. There’s a soul element to their sound, and it just blew me away the first time I saw them play.”

After the festival, Cracker will spend most of the summer on the road with the Last Summer on Earth Tour, also featuring Barenaked Ladies, Blues Traveler and Big head Todd and the Monsters. Is this meant to be a ‘90s revival?
“Conceptually I don’t really see it as a ‘90s thing. That seems a little insulting. This tour is the Barenaked Ladies idea, and they’re bigger now than they were back then. I think this tour is going to be really successful, and I’m glad we’re going to be a part of it.”

How would you describe the way Cracker’s sound has evolved through the years?
“We’ve always been a country roots rock band. We’ve always leaned on American roots stuff, whether it’s soul, blues or country. To me—that’s when rock works best—as a mongrel that mixes all that stuff together. That’s what bands like the Rolling Stones, Led Zeppelin and even the Clash did so well—put so many different styles in a blender. Fortunately, our sound somehow fit into modern rock radio back when grunge had taken over the entire world.”

After all these years, what part of the music industry are you enjoying most these days—performing, producing or teaching?
“I’ve decided to stop being a producer. I think it’s the most thankless job in the world. You’re always in a really awkward position of trying to make a record better, but in order to do that, you have to insult everybody by telling them how their songs aren’t good enough. You always have to be the bad cop. Psychologically that’s not a good place to be.
I do enjoy teaching people about the music business. I teach about the finance and economics of the music business, and it’s a pretty hardcore class. Half of my students seem to be artists and musicians and the others are finance and business majors. I’m basically teaching them all how to rip each other off in the future. When it comes to music, being on stage is still the best.”
http://www.c-ville.com/Article/Arts_Extra/Head_of_the_camp_An_interview_with_David_Lowerybr_font_faceVerdana_Arial_sans_seriffont/

That interest is part of the reason that Cracker, Southern Culture on the Skids, Dex Romweber Duo and more will be rocking Glen Maury Park on Friday and Saturday.

The event, Campout East, is an offshoot of the Cracker and Camper Van Beethoven Campout, in Pioneertown, Calif. David Lowery, a founding member of both acts, said that Campout started out west eight years ago as a combination birthday party for the several band members born in September and a “Star Trek” convention for bands that emerged from Camper Van Beethoven’s California Inland Empire scene.

But Lowery had lived in Richmond for 23 years, and started Cracker there with childhood friend Johnny Hickman. After the West Coast campout was well established, they started Campout East last year, throwing the bash in Crozet. But they got a lot of rain that weekend, and wanted something more logistically suited to big rock shows.

For this year’s event, they decided to get deeper into the mountains, farther west of Richmond.

“Glen Maury Park has a pavilion, so everybody is covered if it does rain,” Lowery said. “I just like the town. I like that area out there. The people are really nice. And the county has … they were the ones who came to us to see if we wanted to do this out there.”

Camper Van Beethoven, the first of Lowery’s bands to find success, won’t be on the bill this year. But Camper is finishing a new album that should be out soon, Lowery said.

Acts from Roanoke and Blacksburg are on the bill, too.

Levi’s Gene Pool, which also plays Kirk Fest on Saturday in Roanoke, is scheduled for Campout East’s Strange Stage at 7:45 p.m. Friday. Roanoke-based Deral Fenderson is set for a 5:30 p.m. set at the Strange Stage.

David Lowery, who was on the ground floor for the formation of two bands with substantial cult followings — Cracker and Camper Van Beethoven — brings Cracker to Buena Vista for the second annual Campout East Festival. Last year, the fest was in Crozet, but the band wanted to get the festival under a big roof and get deeper into the mountains. Missions accomplished. Also on the bill are Southern Culture on the Skids and Dex Romweber Duo, among others. Read more and get festival details in Inside Out.

On this podcast, we talk with Lowery about the festival, about the  music business (he spent his days between college and the breakout of Camper Van Beethoven as the “math ninja” and computer guy for a small, private hedge fund, which made him “accidentally” qualified to deal with the bid’ness.) and about what’s next for Camper Van. We stream music from Cracker’s 2009 disc, “Sunrise In The Land of Milk And Honey” — “Turn On Tune In Drop Out With Me,” “Hand Me My Inhaler” and “Yalla Yalla (Let’s Go).”

Note: My ignorance of recent Lowery events shone through when he mentioned a recent solo album about which I had never heard. That album is called “The Palace Guards”  and was released last year on Savoy/429 Records. Check his website for more info about that disc.
http://blogs.roanoke.com/cutnscratch/2012/05/podcast-with-david-lowery-of-cracker-and-camper-van-beethoven-cracker-headlines-campout-east-in-buena-vista-this-weekend/

This all-ages fest offers fans two days of alternative and classic rock, featuring some prominent names in the music industry. Cracker will be headlining both nights, and will be joined by Southern Culture On The Skids, the Dexter Romweber Duo, Carl Anderson, Radiolucent, 7Horse, and Joe Fletcher and The Wrong Reasons.

These bands will be appearing on the stage of the multi-purpose pavilion. A second stage will be set up nearby for primarily Virginia bands who will perform in between the other bands’ sets.

The gates open Friday at 6 p.m., with the music commencing at 7 p.m., and continuing until late in the night. The music resumes Saturday at 2:15 p.m., and goes on throughout the day and into the night.

Devils Backbone Brewing Company is presenting this year’s edition of Campout East, which is being held in Buena Vista for the first time. Last year’s inaugural event took place in Crozet and drew approximately 1,000 spectators.

Admission is $25 for a one-day pass, or $50 for the weekend. Children under 12 are admitted free. Weekend camping is $50 per site for Friday and Saturday nights.