OUT PREMIERES JAMES WILLIAMSON’S NEW TRACK “C*CK IN MY POCKET”! 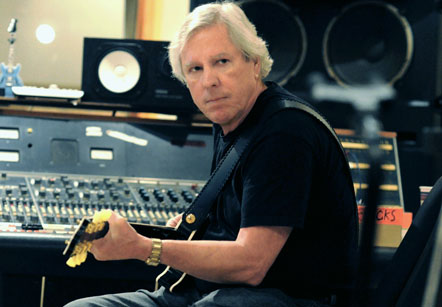 POPNOGRAPHY: Listen: James Williamson’s ‘C*ck In My Pocket’ With The Dicks’ Gary Floyd

The track, “Cock In My Pocket,” was originally penned by The Stooges’ guitar player James Williamson & Iggy Pop back in 1973, but it was never properly recorded. Now it will be featured on Williamson’s new solo album, title Re-Licked, out Oct. 29, which many will view as the “Great Lost Stooges” album of 1974. And Out has the exclusive first listen to share with fans. Written by Iggy during the most volatile periods of The Stooges’ career, the lyrics are, not surprisingly, a tad not safe for work (depending on where you work, that is).

Of special note: This track features vocals by The Dicks’ Gary Floyd, one of a handful of openly gay musicians in the 1980s punk scene. As he told Adam Rathe in his oral history of Queer Core published in Out in 2012:

“The thing that set Austin apart in 1979 was that there were always a lot of queers in the scene. There was a big influence from the artsy radio and television department at the university. I started The Dicks. I met the other guys, and, while it wasn’t exactly true, I told them I already had a band. The scene was so young and uninfluenced; we didn’t have to live up to anything. Soon, other bands that had gay people started showing up. The popular bands in Austin were fronted by openly gay guys.”

So, how did Floyd, all these years later, get involved with recording the track? As Williamson explains:

“Gary was suggested as a singer on my album Re-Licked by the bass player on this song Mike Watt. I had never heard of him before, but several others chimed in that he would be a great choice. So, I researched him some and was pleasantly surprised to see he was a fellow Texan and had some serious CRED of his own… I’m very happy with the way his vocal came out and am looking forward to his new efforts with ‘The Dicks From Texas’.”