POPMATTERS PREMIERES SANDRA PHILLIPS’ MASTERPIECE “TOO MANY PEOPLE IN ONE BED” 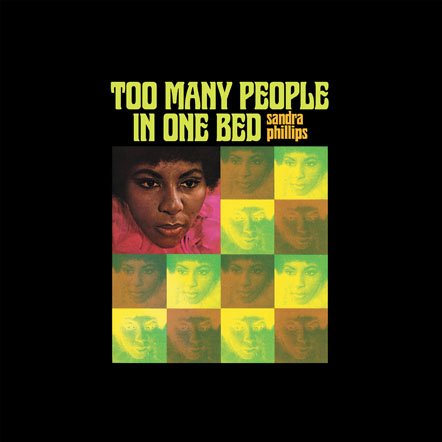 Sandra Phillips is now best known as a Broadway performer and film/TV actor, but once upon a time, she was a budding soul star.

Back in 1970, Phillips was signed to Canyon Records by Macon producer Swamp Dogg and this album was meant to follow on the heels of Doris Duke’s hit “I’m a Loser”. Then a funny thing happened on the road to hitsville… the label went belly up and, with it, Phillips recording. Now, Too Many People in One Bed is finally being released by Alive Naturalsound Records on October 1st. Here we premiere the entire record for your listening pleasure.

Meanwhile Swamp Dogg tells us all about his signing of Sandra Phillips: “I signed Sandra to Wally Roker’s Canyon label and then took her to Macon, Georgia, where I had a magic lantern that produced a band consisting of Johnny Sandlin (drums), Robert Popwell (bass), Pete Carr (guitar), Paul Hornsby (organ & piano) and me, also on piano. My genie wouldn’t let me do wrong. I had a production deal with Wally for as many albums as I wanted to do, with complete autonomy. I’m damn sorry he went belly-up. I always recorded the strings in Philadelphia in the old Cameo-Parkway studio with Richard Rome at the helm. He’s still the greatest arranger in the world. I’m looking at a hotel bill from the Philadelphia Marriott for $25.97 per day, I was there for three days while I was there putting on strings.

“I was grooming Sandra to be the next Doris Duke. As a matter of fact, Doris went into hiding on my ass and I booked Sandra throughout the Midwest, pretending she was Doris. There was a tremendous amount of work piling up that translated into currency. The audiences, promoters, DJ’s and club owners loved her dirty drawers. I encouraged Sandra to talk to DJ’s on the phone periodically as a promo ploy, and one DJ in Kansas ended up wanting to marry her. He kept Doris Duke’s record top ten for two months as a result.”