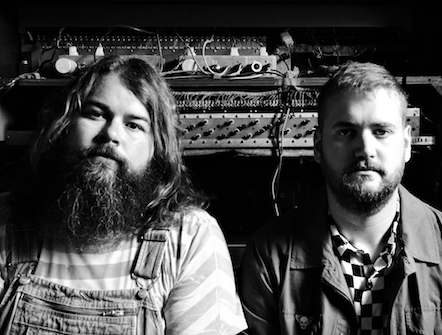 With eight albums behind them, the members of Cincinnati, Ohio’s Buffalo Killers haven’t supplanted the Beatles in terms of recorded output nor popularity (yet) but that doesn’t mean that the Buckeye Boys can’t have a little fun with the Fab Four’s legacy. Witness the outfit’s latest video, “Parachute”, a track culled from the LP Alive and Well in Ohio. With a direct nod to the final public performance from Lennon, McCartney, Harrison and Starr atop the Apple building in London in 1969, the video gives us a glimpse of the collective’s humor and an earful of its heavy-yet-tuneful brand of rock ‘n’ roll.

The group travelled to Dayton for the shoot, with close friend Chad Wells serving as director. Vocalist, guitarist and songwriter Andy Gabbard says, “Chad gets us. He offered his creative mind and video skills to make a visual representation of the song.We weren’t planning on making a video for the song but since the album’s been out I guess it’s become an anthem of some sort. We couldn’t have asked for a better artist to help us make a video.” As for the shoot itself? “We played the song about three or four times on the roof of a bike park,” recalls Gabbard. We froze our asses off and that was that.”