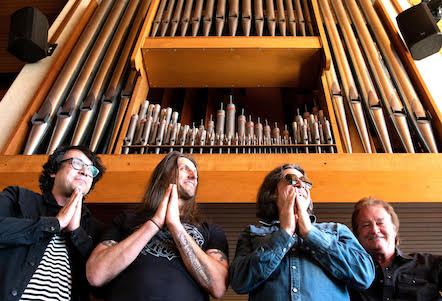 We’re pleased to bring you the premiere of Datura4’s new song “Cat on a Roof” (listen below). The track is taken from the band’s forthcoming album Blessed is the Boogie, which is scheduled to be released through Alive Naturalsound Records.

Dom Mariani of Datura4 commented on the song:

‘Cat on a Roof’ was one of 3 songs recorded during the final sessions for the new record. We’d been forced to take a break after the departure of Greg Hitchcock and reconvened some months later as a three piece to work on new material and complete the record.

It gave us a chance to re-evaluate things and it also marks the introduction of keyboards to the line-up which has brought a new and exciting dimension to our sound.

‘Cat on a Roof’ is mining new horizons.

Datura4 are stoked to share with you this new collection of songs.