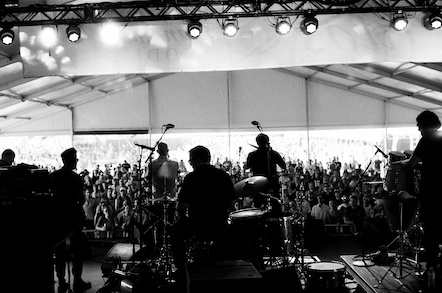 With a mix of dramatic horns and cinematic guitar work, Ikebe Shakedown’s latest song “Horses” will transport you to another world for three and a half minutes. Today, we’re premiering the song, which is taken from the band’s latest album, Kings Left Behind. The album is a celebration of the band’s 10 years in existence and is out on Colemine Records on August 16th.

The instrumental song starts out with a simple guitar riff, recalling a vintage soul sound mixed with just a little spaghetti western influence, all the while a chilling wind is blowing in the background. Once the song starts in earnest, the drums, bass and horns enter the mix to give the song a dramatic, slightly mournful, yet still-celebratory sound.

“‘Horses’ started as a little riff Robin was playing during the first sessions for The Way Home, way back in 2014,” said Dave Bourla. “I found the recording and sent it to Robin on his birthday a year later. Eventually, after some writing with the rest of guys and an epic over-the-phone session, the band ended up with a really different type of song for us. In many ways, it’s our most complete effort to tell a full story, from its production to its instrumentation. Having just the guitar at the start and then adding the whole band gradually, all bookended by the wind – hopefully people can let it wash over them and stir something deep in their imaginations.”

The new album features every member of the band collaborating on the songwriting process together. The band’s current lineup includes Barnaby Alter on drums, Bourla on percussion, Mike Buckley on tenor/bari sax, Vince Chiarito on bass, Jason Colby on trumpet, Nadav Nirenberg on trombone and Robin Schmidt on guitar.