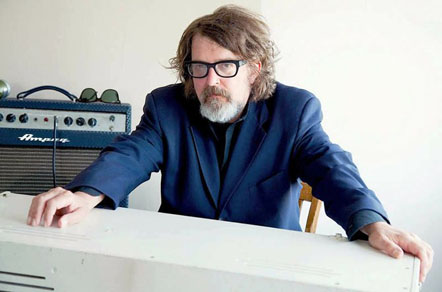 LA EXAMINER (L.A. A&E site) – Positive show preview with artist photo and “Roadtrip Stranger Blues” mp3.
Indie Music Mondays: FREE DOWNLOAD from Peter Case
By Michele McManmon / LA Indie Music Examiner
Never one to rest on his laurels, the enigmatic Peter Case is wrapping up his fall tour with two nights of electric and acoustic recording at McCabe’s in Santa Monica this weekend, Dec 2 & 3rd.  The sets will be pressed into a long-awaited, live, solo album.
FREE DOWNLOAD:  Roundtrip Stranger Blues from The Case Files
“This is the one the fans have been asking for and we’re finally going to do it” says Case who plans to feature the songs he’s been performing on the road this year from his Grammy-nominated solo set, Let Us Now Praise Sleepy John, alongside those from the electro-shock blues album Wig! (2010) and most recent 2011 rarities collection, The Case Files.
The recently released collection proves that Case has something to say about this country and the state it’s in. He is a man wrapped in ideals which he expresses in a pleasing and sometimes catchy pop rock melody that is timelessly eloquent.
Peter Case won’t be slowing down in 2012 as he’ll kick off the year with his annual songwriter’s workshop at McCabe’s in January.  He’ll tour with Paul Collins, his bandmate from The Nerves and The Breakaways.  He’ll release archival tracks, Beach Town Confidential  a live album by The Plimsouls, recorded in 1983 in Long Beach. By spring, their will be a published sequel to As Far As You Can Get Without A Passport.  There is no rest for Case.
http://www.examiner.com/indie-music-in-los-angeles/indie-music-mondays-free-download-from-peter-case

THE LAist (L.A. A&E site) – Positive show preview
Pencil This In: Art Openings, Peter Case at McCabe’s and Holidays Storyelling at Voman’s
MUSIC
Peter Case—former lead singer of The Plimsouls—is on tour to support his recently released rarities album The Case Files. He plays two shows (tonight and tomorrow) at 8 pm at McCabe’s Guitar Shop in Santa Monica. Last we checked, there were a few tickets left for tonight’s show only. He’s recording an forthcoming Live At McCabe’s album over these two nights. Tickets: $20.
http://laist.com/2011/12/02/pencil_this_in_631.php

EAST VILLAGE RADIO “BEYOND BEYOND IS BEYOND” (NYC radio station) – Host Mike Newman will be mentioning the Joe’s Pub show on-air and would also spin a track from The Case Files on his Thu. 11.16 show.

NY  DAILY NEWS (NYC daily) – Show preview.
Peter Case W/ Special Guest Gasoline Silver
Tuesday, Nov 22 9:30p
at The Public Newman Theater: Joe’s Pub, New York, NY
“Peter Case is a minstrel. The job hasn’t changed in centuries. He sleeps in cheap motels and blows his guts out every night in basket houses and coffee joints, night clubs, and the odd the- ater. Same as me. He does it with soul and spirit in a world that has given up. He writes hard edged, soulful stories and sings the daily news. Let us now praise honest troubadours.” -Tom Russell “What impresses me most with Peter is his sense of humor. He can make you laugh with a word. It’s his timing-it’s not thought out…it’s heartfelt.” -Marvin Etzioni “Every line Peter Case writes feels as wild and lethal and point-blank as Russian roulette, but the hammer never falls on an empty chamber” -Jeffrey Foucault “Peter Case is a real songwriter. A troubadour.” -Bob Neuwirth
$20 in Advance; $25 at Door
http://events.nydailynews.com/new-york-ny/events/show/219774545-peter-case-w-special-guest-gasoline-silver

THE BRATTLEBORO REFORMER (Vermont daily) – Feature story to preview Bellows Falls show.
Veteran rocker Peter Case kicks off BF series
BELLOWS FALLS — Peter Case has just about done it all. From being an early power-punker: he wrote “Hanging on the Telephone,” one of Blondie’s biggest hits; to top-40 video tracks; to lovingly compiled tributes to the great acoustic bluesmen; to his path today teaching songwriting and touring solo.

Case will be stopping in Bellows Falls on Friday for a 7:30 p.m. concert to inaugurate a series of shows at the Bellows Falls Opera House Lower Theater, presented by Flying Under Radar. Proceeds benefit the Friends of the Opera House.

Case left upstate New York in 1974 to travel west to California. Starting as a street singer in San Francisco and Los Angeles, he became an early punk-rock convert. His band The Nerves opened for the Ramones across the U.S. in 1977, next, the Plimsouls scored a hit in the ‘80s with “A Million Miles Away.” Case’s former bands continue to enjoy rediscovery by rock’s new generations, but it is his solo career that his proven to be most enduring, earning him accolades and die-hard fans.

As a rocker turned acoustic player, Case opened a door through which others have walked ever since 1986 when his self-titled T-Bone Burnett-produced solo album earned him year-end honors and his first Grammy nod. Set to a tribal-folk percussive blend of blues, country and rock ‘n’ roll, its essences pour through everything he’s recorded since. His songs are continually
Advertisement
revived by other artists (a three-disc set was recorded in tribute to him) and used effectively in contemporary film and television (most recently, on the hit HBO series “True Blood”). Over two decades he’s recorded 10 solo albums — from the highly acclaimed and influential “The Man With the Blue Post-Modern Fragmented Neo-Traditionalist Guitar” to 2007’s Grammy-nominated “Let Us Now Praise Sleepy John.” His 2001 “Avalon Blues,” a tribute to the music of his country blues hero, Mississippi John Hurt featured contributions by Steve Earle, Lucinda Williams and Beck.

“Peter Case is a real hero of mine,” said Flying Under Radar’s Charlie Hunter. “He was on the Kings of California music train we did with Dave Alvin this spring, and his persona and his songs really impressed us. Peter doesn’t compromise. His vision of music, its potential to enliven and enrich, is really inspiring.”

The show is presented in association with Vermont Festivals, LLC and WOOL 100.1FM, with help from Popcorn Sutton Productions and MMorgana. Doors are at 7 p.m. Tickets are $18 in advance, with $30 front row “Angel” tickets available on line. Advance tickets are available at Village Square Booksellers and Fat Franks in Bellows Falls, in Chester at Misty Valley Books, in Brattleboro at Turn It Up!, and at brattleborotix.com. For more information, call 802-463-3669 or visit flyingunderradar.com.
http://www.reformer.com/ovation/ci_19353113?source=rss

ATLANTA EVENT SEEKER (Atlanta online A&E site) – Show preview
Peter Case
When: Friday Nov 11th
Where:at Red Light Cafe
Time:8:30pm
Artists:Peter Case
Price:$20.00
Frontman and founder of the San Francisco new wave band the Nerves as well as the Los Angeles pop-rock band The Plimsouls, Peter Case eventually began his solo career in the mid ’80s. While his previous work with bands was more rock based, his solo work is more acoustic based Americana. With his varied ventures into music, Case has secured a diverse fanbase and a great deal of respect from musicians, with the likes of Bruce Springsteen and Ry Cooder counting themselves as huge fans. Though Case underwent serious heart surgery in 2009, the costs offset by many famous musicians who banded together to raise funds for him, Case is back on the touring bracket.
http://atlanta.eventseekr.com/peter-case/concerts/event/nov-11-2011/3081866