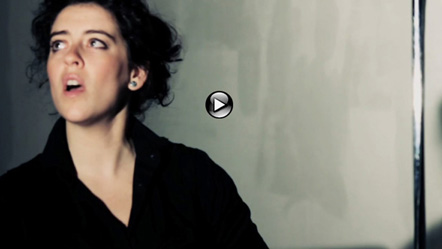 Film At 11: Martha Berner And The Significant Others

Memory and nostalgia seem to be a popular trend in music this past year, and Martha Berner’s video for “Fool’s Fantasy” is no different. Though it may primarily feature Berner and her band performing the song, shots of a film projector are interspliced before it finally casts its home movies upon the band during the crescendo. Granted, “Fool’s Fantasy,” the title track from Berner’s latest LP, may not have the deepest, most symbolic clip ever, but its quaint use of home video superimposed upon the band carries across the song’s message well enough, creating a nice juxtaposition between the image and the strong pipes of Berner. Watch the clip below.

It’s been six years since the release of her well-received debut album …this side of yesterday, but last month marked the return of indie-folk singer/songwriter Martha Berner with her long-awaited full-length follow-up Fool’s Fantasy along with her new band The Significant Others.

“In her long-awaited (six years!) follow-up to her debut album, the Chicago folk-rock singer gathers together a new band (the Significant Others), producer (Scott Fritz, of aforementioned band) and a delightfully twangy, alt-country/bar-rock sound. Fritz contributes tumbling guitar lines that nicely compliment Berner’s vocals, which switch from smoky-sweet to raw and impassioned on a dime—it’s easy to see why the singer’s live performances have been so lauded by critics.” – METROMIX NYC

“There is a certain magic on these twelve tracks….Berner sounds better than ever before.” – ROOTSTIME: BELGIUM

“By keeping their obvious influences diverse, their latest release “Fool’s Fantasy” gives you a taste that is not necessarily heard on the radio, but should be. If you like Americana, this is totally worth checking out.” – ECLECTIBLOGS

“ …reminiscent of the bands Steve Earle put together on all those Twangtrust records. In a sea of “half decent” female singer/songwriters, Martha Berner really stands out.” – WHEN YOU MOTOR AWAY

“Evokes the vocals of Tori Amos and the musical style of Wilco.” – CHICAGO TRIBUNE