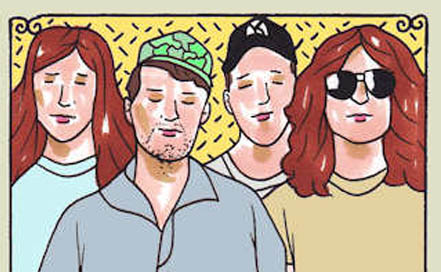 The Southern authenticity and the dual parts pain and hilarity (which could just be some acknowledgement of the surrounding madness) that Lee Bains III & The Glory Fires roll into the music that they write is evident. It spills over with feelings of the long road’s isolating tendencies, with extended stretches of being away from family and that undeniable urge to get back to them at all costs, all while knowing that keeping the wheels rolling is part of paying the bills and keeping those little mouths fed. Bains creates a mood that mixes in the open road freedom that can be felt on a solitary journey, but is quick to include the horrible heartburn of loss, of missing out that comes from a feeling that you’re leaving the ones you love high and dry, that you’re just not there for them, but you’ve got no choice but to be that way, to be that man for them, for you know no other way. He deals with the lives of people whose hands are tied. They are at the mercy of their circumstances and while that’s not lost on them, they ponder the ways that they live by, the little that they survive on sometimes. These are people who are going to get by. They’ll continue to stare into the murderous red of a setting sun and they’ll try to beat it down to the horizon. When they fail, they’ll try to beat the black of the night to a pulp. They’ll try to get back to where they belong, with as little damage done as possible.
http://www.daytrotter.com/?utm_source=DTNL&utm_medium=email&utm_campaign=131006#!/concert/lee-bains-iii-and-the-glory-fires/20057054-37383185