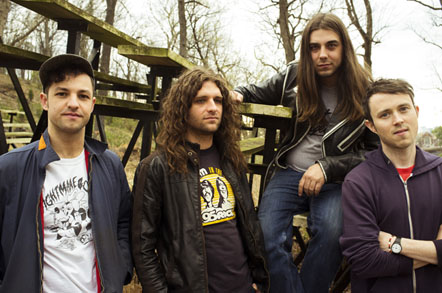 “If there’s one tradition Bains and the Glory Fires unquestioningly uphold, it’s the Friday-night custom of burning down the house. They even once got thrown out of a club for being too loud. In Texas. ‘We’re going to wash ourselves in fire and water,’ Bains announces in ‘Burnpiles and Swimming Holes.’ Dereconstructed is worth the plunge. – Ann Powers / NPR

[4 out of 5 stars] “As pure a shot of adrenaline as a guitar band will release this year…  a terrific album.” – Michael Hann / THE GUARDIAN

“A raging burnpile of garage and Southern rock, dirty, supercharged blues and soul, Stonesy groove, Crazy Horse howl, and punk slam. With these songs, Bains surely wants to make you think; he surely will make you shake.” – Stuart Munro / THE BOSTON GLOBE

“Four Birmingham boys have made what might be the greatest-ever rock record about the South.”  – Chuck Reece / THE BITTER SOUTHERNER

“Sounds like Flannery O’Connor gave up fiction for a Coors and a Gibson SG.” – Jessica Suarez / ROLLING STONE