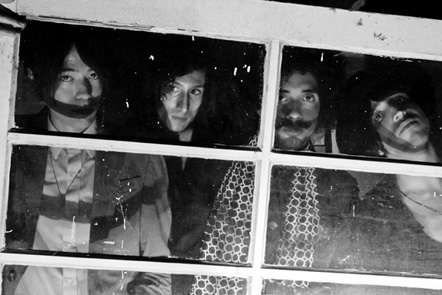 The Bixby Knolls are set to release their full-length debut, Near & Undear, on December 11th. On it the L.A.-based foursome offer up 11 tracks that blur the lines between indie rock, psychedelia, post-punk, pop and even soulful R&B. At times spastic, surreal and schizophrenic, this is guitar-driven rock’n’roll delivered with conviction, swagger and, above all, attitude.

The band is led by L.A.-native singer/songwriter/guitarist Curt Barlage and features the talents of drummer Sammy Fayed, bassist Christian Morales and guitarist Cesar Saez De Nanclares (who relocated from Mexico City to join the band). Near & Undear was recorded at the Sound Factory in Hollywood with producer Joe Cardamone, engineer Greg Gordon (Oasis, Supergrass, The Dandy Warhols, Jet), and Mark Chaleki as mastering engineer. While the diverse sounds that reverb throughout this hypnotic debut are undoubtedly unique, The Knolls aren’t afraid to proudly wear their influences on their sleeve. Roxy Music, Kasabian, The Libertines, The Stone Roses, The Mondays, Arthur Lee & Love, Primal Scream, The Clash, The Modern Lovers, The Cramps, Joy Division and The Glimmer Twins struttin’ their stuff can all be heard echoing throughout the record’s sonic landscape, while Barlage’s voice emotes the affected themes of heartbreak and struggle heard in classic R&B and soul from the ’60s such as The Zombies, Four Tops and Nolan Porter. Perhaps Barlage’s take on the band’s sound, however, boils it down to its essence when he admits, “Our record reminds us of Bobby Gillespie and Joe Strummer in a fist fight.”

The Bixby Knolls’ Near & Undear will be released digitally through Cobraside on December 11th. The band will be celebrating their Record Release Show on Mon., Dec. 10th at The Echo in Los Angeles. Additional West Coast and Mexico tour dates to be announced soon.

7. Waking Up The World