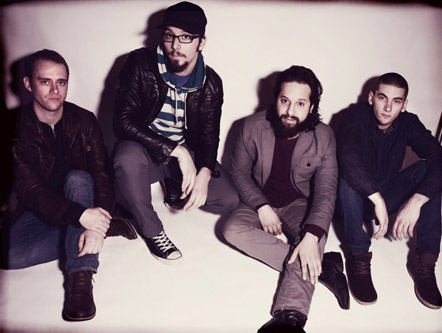 Taking queues from classic pop, rock’n’roll, and Americana, Hollis Brown combines raw rock sensibilities with sweet melodies and hearfelt lyrics to create a rich, warm sound that can fill any room. Principal songwriters Mike Montali (vocals) and Jon Bonilla (lead guitar) grew up listening to the classics. These native New Yorkers were born in the late ’80s when the city was identified by its grit, passion and authenticity. The combination of an urban upbringing and throwback musical influences of traditional blues contributed heavily to the band’s sound. However, contrary to most blues-influenced bands, Hollis Brown leans heavily toward melodic pop as well. You’d be hard-pressed to find a Beatles song these boys don’t know by heart, and you can hear it in the music. Classic rock with a New York state of mind, Hollis Brown is a throwback to an era when music felt fresh, songwriting was revered and performances routinely inspired.

HERE’S WHAT PEOPLE HAVE BEEN SAYING ABOUT HOLLIS BROWN’S RECENT ALBUM RIDE ON THE TRAIN:

Through this consistently impressive first long player, Hollis Brown have carved out their own space with a set of timeless, rustic and eminently tuneful and soulful sounds. –  SHINDIG!

Ride On The Train is the group’s debut full-length album, and it’s a gem, full of memorable songs and a sharp, taut sound that only includes what is necessary to put the song over. – ALL MUSIC

Ride On The Train is an album that a lot of people are going to love for its multi-generational appeal. But besides that, it’s just good rock music. It’s hard to peg a specific sound on it. There are no “skip” songs on this album though. Be prepared to keep it in your player, on repeat, for a long time. – EAR TO THE GROUND

Hollis Brown’s Ride On The Train is available now in all formats. Limited Edition Color Vinyl available through Bomp-mailorder.