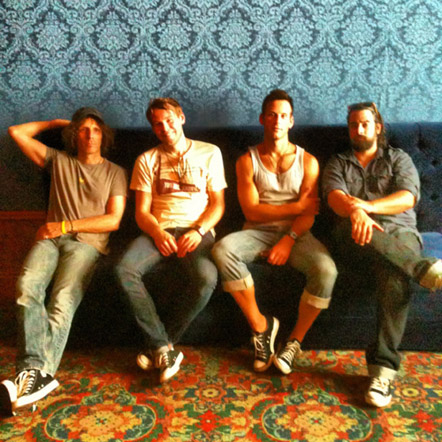 [photo: Katie Moon]
“Hero Jr.’s album is a polished survey of modern rock that isn’t too quirky or too brutish to turn off mainstream listeners. Lead singer, Evan Haughey, sounds like Kings of Leon front man Caleb Followill when he’s worked up and going for broke. Hero Jr. has everything in its right place. Haughey’s guitar licks, which range from gritty to artfully restrained, sound great, and his voice is radio-ready.” – David Lindquist / INDIANAPOLIS STAR
“Hero Jr. plays a solid post 90’s rock with a radio ready sound. They rock it out with a top 40 consciousness. In a music scene full of art rockers, I’m glad to see a band that’s not afraid to be likeable.” – Wayne Bertsch / NUVO WEEKLY
“Hero Jr. seemed to stumble on a formula for success right out of the gate: write a strong, catchy record, promote like hell and play the biggest shows you can get your hands on.” – Dan Fahrner / MUSICAL FAMILY TREE
“Straight-up, no gimmicks rock n’ roll.” – INDY CONCERTS

Remember when rock’n’roll seemed to have it all? Passion, power, chemistry… and timeless songs that people could relate to? Hero Jr. does. And their forthcoming full-length debut Backup Plan is the perfect document to prove it. On it, the Indy-based foursome combine soaring vocals, stinging guitars and driving rhythms and channel them into 11 indelible, hook-filled songs that help define the blur between ’70s classic rock, the angst of the Alternative Nation and modern indie-rock. The band consists of brothers Evan Haughey (vocals/guitar) & Matthew Haughey (drums/vocals), along with bassist Dave DuBrava and the most recent addition to the band, guitarist Ken Rose (Marianne Faithfull). Backup Plan was produced and engineered by Paul Mahern (T-Bone Burnett, The Fray, Iggy Pop, John Mellencamp, Afghan Whigs, etc.) and Ken Rose, and was recorded at both Livingston Studios in London and Mahern’s White Arc Studio in Bloomington, IN. Some have favorably referred to Hero Jr.’s music as having a radio friendly edge to it, which is certainly true. These aren’t tunes tweely plinked-out on a toy piano with a banana by today’s cool kids, but rather thoughtful, intelligent and expertly performed songs that hit extremely hard – affecting the head, heart and, yes, ass in equal measure. Hero Jr.’s Backup Plan is out now through Desa Records in CD and Digital formats.