HAVE GUN, WILL TRAVEL TO RELEASE THEIR FOURTH STUDIO LP “FICTION, FACT OR FOLKTALE?” 9/10! 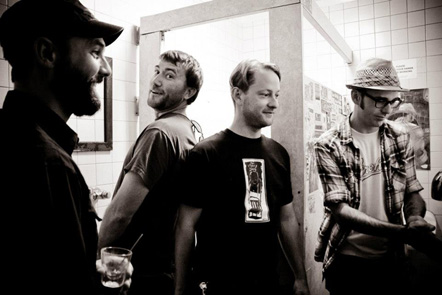 Bradenton, Florida’s Have Gun, Will Travel have a natural instinct for combining folk, pop, rock and classic country influences to create a sound all their own. “Their music has a great energy to it with infectious, sing-along choruses and refrains” remarked NPR’s Robin Hilton. American Songwriter called HGWT’s music “organic, infectious Americana Pop. Their music has a refreshing immediacy to it.”

Over the course of three acclaimed albums, hundreds of shows and copious populist-radio airplay, they’ve nurtured a tradition of inviting all manner of gifted musicians to join the fray. The group’s inclusive nature allows it to flesh out tunes that run the gamut from foot-stomping front-porch spirituals and evocative Texas swing to strum-punk rave-ups, hill-country historicals and more.

HGWT’s music has been featured in a national Chevy TV commercial; multiple episodes of the PBS series Roadtrip Nation; and an episode of CBS’s The Good Wife. Their previous albums have spent months on the CMJ Radio Top 200 chart. And their live performances have been described as rousing, rollicking, energetic and dynamic.

The band’s highly anticipated, fourth full-length album Fiction, Fact or Folktale? will be available September 10th on CD and digital formats through This Is American Music. The album was mixed by HGWT’s own Scott Anderson and mastered by Rodney Mills (Allman Brothers, Lynyrd Skynyrd, Drive-By Truckers).

Turns out that music isn’t the only thing Have Gun, Will Travel are passionate about. The band recently partnered with Tampa’s award-winning Cigar City Brewing to create their own craft beer inspired by their unique tastes in both music and brew. Their High Road Ale (a pale ale with a hint of citrus, and named after their song “High Road” from their new album Fiction, Fact of Folktale?) recently won the National Grand Championship at the United States Beer Tasting Competition in the Pale Ale category. Not bad for a bunch of beer-loving musicians.

HAVE GUN, WILL TRAVEL TOUR DATES:

1. Standing at the End of the World

7. Silver and the Age of Opulence

FOR MORE INFO ON HAVE GUN, WILL TRAVEL:
https://www.facebook.com/hgwtmusic