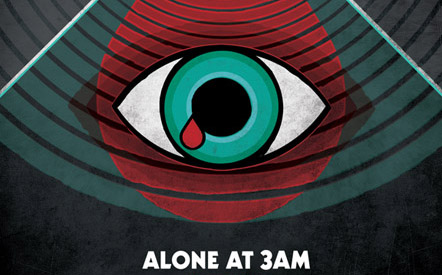 CLICK HERE TO LISTEN TO THE PREMIERE OF ALONE AT 3AM’S NEW SINGLE “I’M DYING” VIA GUITAR WORLD!

ALONE AT 3AM TO RELEASE THEIR NEW STUDIO ALBUM “SHOW THE BLOOD” SEPTEMBER 18TH VIA SOFABURN RECORDS!

On their 2012 LP Midwest Mess Alone at 3AM explored the balance between volume and personal reflection, which cemented Fender’s reputation as one of Cincinnati’s most prolific and insightful songwriters. The website Bucketful of Nails was waiting for it, claiming, “occasionally an album comes along that has that fire, that smoldering spark your soul requires.” With songs like “Weekends at the Cape” and “Walk Away,” the singer has become more confident in the precisely personal while the band investigates new sonic territory – from the brittle postpunk of “Wolf in the Woods” to the stomping set-closing catharsis of “Burn This Town.” Throughout, Sarah Davis’ harmonies fuse with and console Fender’s tattered vocals in the band’s most far-reaching release to date. Popmatters deemed the record “raw, honest, literate storytelling, [with] brilliant song structures, [and] a built-in integrity.”

Alone At 3AM’s new studio album Show The Blood will be available on CD and digital formats September 18th via Sofaburn Records. Tour dates to be announced soon.