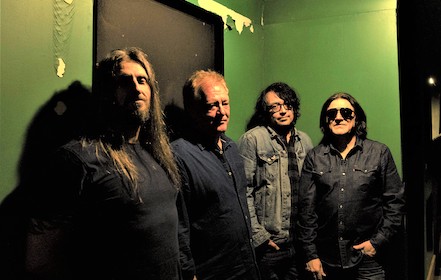 COSMIC, MAN: Dom Mariani & Datura4
We settle in for a fresh convo with Australia’s Dom Mariani on his band’s upcoming April release, West Coast Highway Cosmic. “I’m a classic rock tragic at heart,” confesses Mariani. And we wouldn’t have it any other way. (Above photo: Ben Taylor-Vivian)

When it comes to music, it’s such a cliché to say about any locale, but we’re gonna say it anyway: there’s just something about Australia. Possibly because of its isolation – remote from everything, getting cultural influences second- and third-hand, having the artifacts but little of the attendant hype to deal with. Possibly it’s simply the independent spirit of the average Australian – the combination of isolation and (though it’s admittedly overstated) a history of penal colonialism contributing to a certain filter, a way of looking at the art of other cultures (particularly American and British) and transforming it into a distinctly Australian vision. Regardless, the rock & roll that’s come out of the island nation has its own special flair, a certain je ne sais quoi that other countries don’t have.

All that speculation serves as a lead-in to the introduction of one Domenic Mariani, a singular figure in Australia’s rock scene for forty years. Lover of melody, shit-hot guitarist and absolutely winsome singer, Mariani has made his mark on the fields of garage rock (the Stems, the Stoneage Hearts, the DomNicks), surf rock (the Majestic Kelp) and, especially, power pop (the DM3, the Someloves, the Summer Suns), gaining diehard fans around the world. His current project, a singular spin on bluesy power rock dubbed Datura4, pays homage to his youthful love of early seventies blues rock and hard rock, emphasizing his expert six-string pyrotechnics without eschewing his traditional, song-based melodic instincts. Joined by guitarist Greg Hitchcock (Kryptonics, You Am I), bassist Stu Loasby (the Majestic Kelp, Jack & the Beanstalk), and drummer Warren Hall (the Drones, Gutterville Splendor Six), Mariani made three richly produced, riff-soaked albums that sound distinguished from his other work, while still being of a piece with it.

Hitchcock has since left and been replaced by keyboardist Bob Patient; the reconstituted quartet returns to the record racks this spring, on April 17, with West Coast Highway Cosmic (Alive Naturalsound), its most varied and accomplished LP thus far. We caught up with Mariani via e-mail to talk about the new Datura4 album and how it fits in with the rest of his career.

BLURT: Congratulations on West Coast Highway Cosmic. The songs are catchier, the riffs are sharper, the vocals as strong as ever. You’ve mentioned not wanting to repeat yourself from album to album. What inspired you to push D4 further than it had gone before?

DOM MARIANI: A couple significant things happened during the sessions for previous album Blessed is the Boogie [2019]. The first was the departure of Greg Hitchcock, which reduced the band to a three-piece for the recording process. The second, and most timely, was hooking up with our keyboard player Bob Patient. We had Bob come in for a session. There was a connection and it really opened up a world of possibilities for us. Greg had been against the idea of keyboards on previous records, and his leaving really freed things up for us to go beyond the two guitars-bass-and-drums thing.

We were chuffed when Bob agreed to join the band. This led to two new songs (“Cat on a Roof” and “Evil People Pt. 2”) being added to the album. Both from a band and a personal songwriting perspective, it’s the best thing that could have happened. West Coast Highway Cosmic is the first full album with Bob, and is just the tip of the iceberg. There was more spontaneity, paired with a “let’s see what happens” kind of approach to the recording. Some of the tunes came from basic grooves that Warren and myself had worked up in the studio. The results are a little more eclectic than on our previous albums.