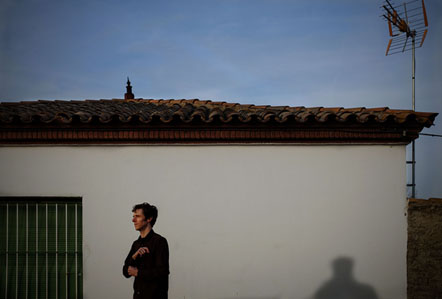 Filmed in the same studio where Hank and The Pleasant Valley Boys cut the original in 1949.
photo by Pedro Anguila

In August of 1949, Hank Williams and The Pleasant Valley Boys entered Cincinnati’s Herzog Studio to record “I’m So Lonesome I Could Cry.” The staggeringly bleak song is arguably Williams’ greatest achievement as a songwriter and a high mark in the history of country music. It’s since been covered by everyone from Townes Van Zandt to Al Green to The Mountain Goats. Terry Bradshaw even managed to chart a version of the song back when he was still a Pittsburgh Steeler (and, it should be noted, The Blonde Bomber managed to acquit himself despite syrupy countrypolitan backing).

So it makes sense that Kentucky folk singer Daniel Martin Moore would choose to cover “I’m So Lonesome I Could Cry” himself during a recent session at Herzog. Moore, whose Jim James–produced LP Golden Age was released at the end of last year, was joined in the studio by Lisa Walker of the band Wussy. “I think the song’s staying power comes from the imagery and the flow of the lyrics’ meter through the melody,” Moore says. “It’s a masterpiece of a song—so sad, so beautiful.”

We’re proud to be premiering Daniel Martin Moore and Lisa Walker’s take on “I’m So Lonesome I Can Cry,” which you can watch below. You can also catch Moore on the road starting later this week; those dates are below, too.