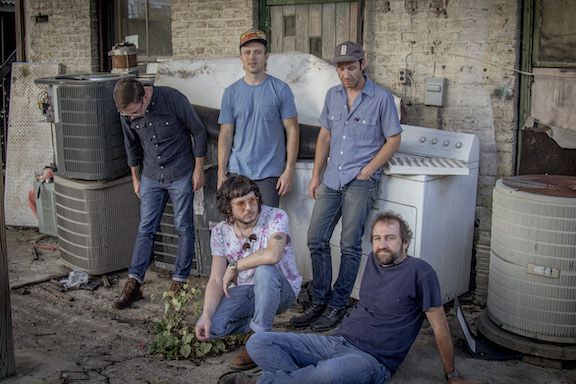 Radar is just now picking up Birmingham, Alabama’s The Blips, whose tuneful brand of bash and pop executes a –perfectly imperfect landing on their raucous debut LP. Clocking in at just under 32 minutes, this puddle jumper of a record comes in hot with reckless punk abandon and wildly infectious rock ‘n roll energy, flying by the seat of its pants all the way.

At the controls is guitarist and songwriter Will Stewart, who recruited an interchangeable crew of Birmingham, Alabama hotshots in Wes McDonald, Eric Wallace, Taylor Hollingsworth, and Chris McCauley for a friendly collaboration that finished work in early 2020, just before the pandemic brought everything to a screeching halt. Having all led bands or recorded under different aliases or their own names, they checked their egos at the door, playfully swapping instruments, switching out singers at will and engaging in a variety of gang vocal sighs and shouts, all while heaving big, strong hooks to-and-fro, performing with exuberance and energy, and shooting off backyard fireworks of slightly banged-up solos and tortured twin-guitar leads from the clearance section.

Thinking of a comparison? Look no further than The Replacements, or better yet, the work of their former bassist, Tommy Stinson, post-breakup, which drew up the torn-and-frayed blueprints for such rousing, bittersweet anthems as “Inside Out,” “Walking Home,” “Throw Me Around,” “One and Done” and the deliriously bratty “Out to Sea.” Relentlessly catchy, with witty lyrics that ponder life’s unpredictable plot twists, the album builds up a good head of steam, slowing only for the rough-and-tumble pop ballad “Gold Rush” and to give in to the primal, sludgy surges of their “Wild Thing II” sequel. Warped by moody, post-punk effects, “Same Do” turns urgent, propelled by smart handclaps, before The Blips stab their way through “Patty’s Patio” and segue into a sneering chorus that explodes with the overdriven guitars and crashing drums of Cheap Trick. This stuff is highly addictive and accessible, with just a touch of twang. Saint Paul Westerberg would surely bless this glorious mess. —Peter Lindblad
http://www.elmoremagazine.com/2021/04/reviews/albums/the-blips