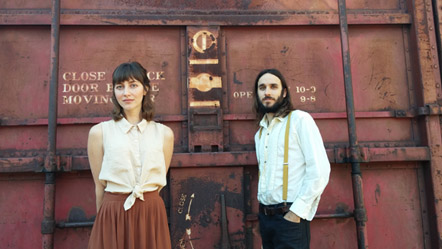 CLICK HERE TO LISTEN TO THE PREMIERE OF TRIUMPH OF THE WILD’S NEW SINGLE “CALIFORNIA TO THE CROSSROADS” VIA CMT EDGE!

TRIUMPH OF THE WILD TO RELEASE THEIR SOPHOMORE ALBUM “WE COME WITH THE DUST” APRIL 14TH!

WE COME WITH THE DUST TRACK LISTING:
01 California To The Crossroads

“With its bluesy melody and sunny rock ‘n’ roll guitar, standout track ‘California to the Crossroads’ really is a combination of sounds from the Golden State and the Deep South. But add in singer Christy Barrett’s seismic vocals, and it becomes something all its own.” – CMT EDGE

“On lead vocals, Christy Barrett commands the audience with her Janis Joplin-esque range, and a tone capable of sending chills down your spine, while Ryan Schilling’s supportive harmonies and minimalistic acoustic guitar/harmonic combo brings about the perfect balance to their sound. Every once in a while, you get lucky enough to stumble across a band that emanates so much inspiration from their performance that it can flat out restore your faith in humanity.” – THE CATALYST