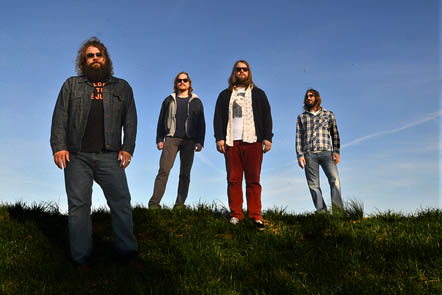 Buffalo Killers deliver hook-heavy, homegrown rock ‘n’ roll. Led by songwriting brothers Zachary and Andrew Gabbard, the band has drawn the attention of the likes of Chris Robinson, who invited them to open a string of dates for The Black Crowes, as well as Dan Auerbach, who produced their sophomore effort Let It Ride.

Hot on the tail of a prolific three years of releases – the critically acclaimed 3 (2011), Dig. Sow. Love. Grow. (2012) and Ohio Grass (2013) – the band has just completed their fifth full-length studio effort, Heavy Reverie. The album was recorded in Cleveland, OH at Crushtone Studios with producer Jim Wirt, and will be available May 13th on vinyl, CD and digital formats via Sun Pedal Recordings.

There’s a different world out there that awaits you. With heavy reverie Buffalo Killers are bringing that world to you.

HERE’S WHAT PEOPLE HAVE BEEN SAYING ABOUT BUFFALO KILLERS:
Gritty, hook-laden psychedelic rock. Buffalo Killers’ Heavy Reverie takes the monster riffing of bands like Mountain and Blue Cheer and tempers the volume with melodic hooks that could have been written by Alex Chilton’s Big Star. – CLASSIC ROCK
Heavy on the heavy and with plenty of hooks – HIGH TIMES

Buffalo Killers’ Crazy Horse/Big Star/Badfinger base is built upon with hazy-hippie sing-along melodies, a live vibe dripping with highway miles, and an understanding of classic songwriting and arrangement approaches that would make John Fogerty smile. One of the best. – MODERN DRUMMER

Not many bands have mined a late hippie-era approach with more satisfying results. – ALL MUSIC