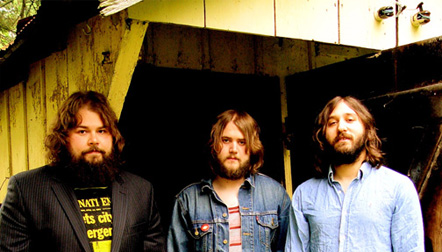 HERE’S WHAT PEOPLE HAVE BEEN SAYING ABOUT BUFFALO KILLERS’ RECENTLY RELEASED ALBUM 3:

Buffalo Killers are an American rock band comprising brothers Zachary and Andrew Gabbard with Joseph Sebaali. Quickly signed to Alive Records after sending a burnt CD with just their telephone number and name on it, their self-titled debut album was released in October of 2006.

Buffalo Killers drew the attention of Chris Robinson, who invited the band to open a string of dates for The Black Crowes. That road trip spawned the songs for the band’s second long player, Let It Ride, produced by The Black Keys’ Dan Auerbach.

Most recently, the Buffalo Killers collaborated with Kelley Deal on the just released Sing For Your Meat: A Tribute to Guided By Voices, and on August 2nd the Cincinnati-based trio will be releasing their new self-produced album “3” on Alive Records (available on CD, Digital and Colored Vinyl in both blue and purple – limited to just 500 copies each color).