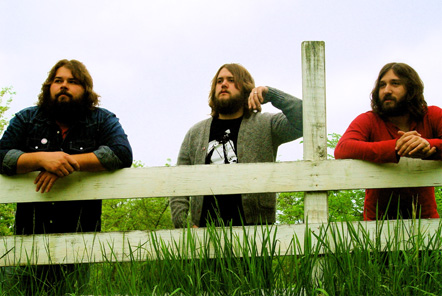 Buffalo Killers’ Zach Gabbard on community, family, and history in his band’s music

Cincinnati’s Buffalo Killers arose following the dissolution of garage-rock act Thee Shams. The newly-formed trio — consisting of brothers Andrew and Zach Gabbard on guitar and bass, respectively, along with drummer Joseph Sebaali — is a definite change of pace from the shaggy-haired rock of their previous band. Taking a tack to a different decade, Buffalo Killers’ sound draws strongly from the latter part of the ’60s and the early ’70s, when emotionally resonant lyrics were paired with roots music by the likes of the Byrds and Crosby, Stills, Nash, and Young. Buffalo Killers are touring in support of this year’s release on Alive Records, entitled 3, and they stop at Knuckleheads this Thursday, November 10, opening for the North Mississippi All Stars. We recently spoke with Zach Gabbard by phone about the band’s influences and tendency to draw fortuitous opening gigs.

The Pitch: Your new album is entitled 3. Why go so simple with it?

Zach Gabbard: You know, there’s three of us, it’s our third record — we just felt, “Why not just go simple with it?” It seemed fitting. We had our friend, Joshua Levy, do the cover and we were kind of tossing other things around and the “three” just kind of stuck out more. I just though it was fitting, with the three of us, third record — it just seems like kind of a mystical number.

You guys have managed to get on some really impressive tours. I read the story of how you were personally asked by Chris Robinson to be the openers for the Black Crowes, but I’m also kind of curious as to how you ended up on this North Mississippi All Stars tour.

We met Luther [Dickinson] — he’s been playing with the Black Crowes, he’s been their guitarist for, oh, quite a while — and it was just a thing where, you know, he admires our work and we admire his, and we became friends on the road, traveling with [the Black Crowes], and he did us a solid.

I always chalk it up to luck. We’ve always gotten lucky. With the whole Chris and the Black Crowes thing, we did our first tour to the West coast, and a friend of ours came out to the show. And, he told us that Chris had told him about the show, and I just thought, “What? How does this guy know who we are? It’s our first … whatever.” I gave him a CD that night, and he took it back to Chris.

When I got home, we had gone and planned another trip back out West, and I had just gotten off the phone with our booking agent. We were settling up things, and he started calling me back. I thought, “What does he want? What is so important?” And, what it was, was that they had called, right after we had settled that up, and we did the whole United States with ’em over the course of two years.

They took us to the West coast, East coast, we did Florida with ’em, and that was our first outside the club situation. You know: outside our element. Their crew did our sound, helped us come into that situation. It is a lot different to play in front of that many people. It is a different situation when they’re backing up to the loading dock their semi trucks, and we’re backing up our van. They took us under their wing and showed us how to deal with a completely new … everything.

And with the Black Keys — I had known Dan [Auerbach] and Pat [Carney] for a long time, and Dan invited us to do a record at his house. We did our second record [Let It Ride] with Dan, we’ve done some dates with them. We’ve just gotten really lucky.

I’ve noticed that you and a lot of the bands with which you’ve toured — Black Crowes, Black Keys, North Mississippi All Stars — all seem to share this modern take on classic Byrds-y harmonies and roots music. Where does Buffalo Killers’ influences come from?

Well, we grew up, me and my brother — my brother the guitar player, Andrew — we grew up in a very musical household. Our dad played guitar and he taught us how to play, and our weekends were spent with him and his friends playing music. This was the trade that our father gave to us. We grew up listening to the Grateful Dead, Neil Young, all of those sounds were all around, all the time. When got older and we started writing songs, it’s all coming from a sincere place in almost like our childhood, you know?

And, me and my brother write songs apart and bring them together. We’ve always had this connection, where it seems like we’re writing about the same themes: love and family, all these things that are super-important that, in your younger days, you sort of lose sight of.

To play music, and to look over at my brother, who I love — and we don’t fight and we’re in this together — and our drummer, Joey — him and Andy were childhood friends growing up — to play with those two, it just tickles me to death to be on stage. They’re wonderful musicians, and I look over, and I don’t hate ’em. ‘Cause I’ve been in that situation. I enjoy every bit of it, and that’s the way it should be.

It certainly comes through in the new album. It’s very relaxed. I’m not going to say it’s mellow, but you guys let the music breathe a lot.

And I think that that’s part of our progression as a band. When we were making this record, it was going the way it was going, and we were worried this isn’t the live — when you’re making a record, and you’re used to playing all the time, for me, I had the mentality of making a setlist. And it’s not a setlist — this is making a record.

Once we let that go, and left it behind — “This isn’t us playing live, this is us making a record.” — everything just fell into place, and we stopped worrying about it, and I’m super-proud of it.