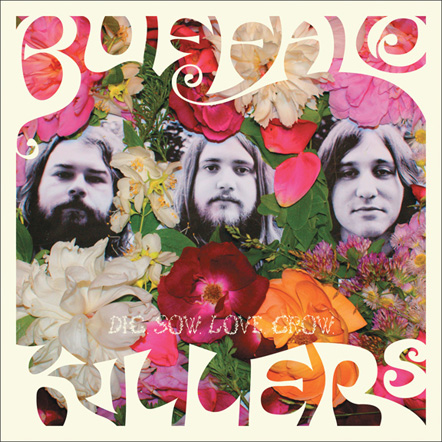 In just the short time since the release of their fourth studio album Dig. Sow. Love. Grow. in August Buffalo Killers have been on a roll. The Ohio-based trio have been tearing up the road in support of their critically-acclaimed new album – touring with the likes of The Sheepdogs and will soon be embarking on a November tour with Hollis Brown. In addition to their recent studio LP, they’ve also just released a new double-sided 7″ vinyl single produced by The Black Keys’ Dan Auerbach (who also produced their 2008 full-length Let It Ride) as part of Shake-It Records’ Dangerous Highway: A Tribute To The Songs of Eddie Hintonproject. On it Buffalo Killers turn in moving covers of the legendary Muscle Shoals musician’s “Heavy Makes You Happy (Sha-Na-Boom-Boom)” and “Still Water Runs Deep.”

As if that wasn’t enough, Buffalo Killers’ Zachary and Andrew Gabbard along with Joseph Sebaali have just emerged from the studio with two newly recorded non-LP sonic gems that they’re offering through their website as pay-what-you’d-like singles (one of which you can download as a free mp3 below to share).  While the beautiful organic nature of their new song “Nothing Can Bring Me Down” hints towards some of the intoxicating strengths of both Dig. Sow. Love. Grow. and their previous effort 3, the other new track “Baptized” is a down-and-dirty rocker that weds hedonistic hard rock and heavy psych with the righteous and redemptive qualities of gospel music.

Dig. Sow. Love. Grow. is out now through Alive Naturalsound Records and is available in CD and Digital formats, as well as Limited Edition Pink Vinyl LPs exclusive to mailorders through Bomp!

The band hits noticeably harder this time out, and these ten songs sound less like the work of a bunch of Laurel Canyon refugees and more like the proud Midwesterners they really are. [Their last album] 3 sounded as if the Buffalo Killers were reaching for something bigger and grander than they’d attempted on their first two albums; Dig. Sow. Love. Grow., on the other hand, is a simpler and more organic effort that suggests these guys just want to rock, but it succeeds well enough to be as satisfying as its predecessor. – Mark Deming / ALL MUSIC
The boys rediscovered the volume knobs on their equipment when recording Dig. Sow. Love. Grow. Yup, this James Gangsian number was intended to be played only one way, and that’s loud. – MY OLD KENTUCKY BLOG

“Steeped in ’70s classic rock, Buffalo Killers’ terrific new album Dig. Sow. Love. Grow. features harmonies clearly culled from their past. You can trace the Neil Young influence on their albums going all the way back to their debut. But that influence is even more prominent on Dig. Sow. Love. Grow, which sounds like the classic rowdy albums Young recorded with Crazy Horse in the ’70s” – Jeff Niesel / CLEVELAND SCENE
“Ohio band waves their freak-flag high while keeping things concise. Despite writing heavy riffs that can turn mountains into volcanoes, they don’t pummel you the way most power trios tend to (we’re looking at you Mountain, Blue Cheer, Gov’t Mule). Songs like “Blood on Your Hands” and “I Am Always Here” show a gift for creating memorable, hooky songs that recall the best of Steven Stills, only louder.” – Warren McQuiston / PERFOMER MAGAZINE

With their latest album, Dig. Sow. Love. Grow., brothers Andy and Zachary Gabbard and Joseph Sebaali return with a no-frills production that sounds instantly familiar and is infused with a depth and honesty conspicuously absent on many modern releases.  – Kyle Melton / DAYTON CITY PAPER

[5 OUT OF 5 STARS] Dig. Sow. Love. Grow. sees the band absolutely stampeding back to their raucous rock sound, but it also goes the extra step by showcasing both the majestic side of the Buffalo Killers, while managing to convey the overwhelming and unbridled power of the group. The band, which features brothers Zachary (bass and vocals) and Andrew (guitar and vocals) Gabbard, as well as drumming monster Joseph Sebaali, most certainly draws influence from a wide catalog of rock and roll’s elite. But Dig. Sow. Love. Grow. isn’t just another retro-sounding album that mimics bands of yesteryear. It’s a raw, real and commanding sound forged from grit that is as wide and expansive as the western plains, and is as mighty as it’s namesake. Simply put, it’s f**king awesome. – Brian Johnson / MARQUEE MAGAZINE

This is a band that plays guitar based rock & roll with a heavy heap of vocal harmonies – with an emphasis on songwriting, and dynamic instrumental interplay. They play what they love in the fashion they are able, and what we are given is a soulful stew of excellent songcraft, and quality rock – whether it was recorded this year or in 1969 matters not a bit. The songs are melodic and memorable, the vocals a classic example of what happens when brothers sing together, and they have a drummer who often comes dangerously close to rolling off the rails with a strange, and unpredictable syncopation that makes me smile as I remember Levon Helm. What I really like is the fact that we may be in the presence of a new and genuine American guitar hero. Andy Gabbard is an encyclopedia of cool guitar tones, chord changes, fills, and solos. – ROCK GUITAR DAILY

It’s no surprise that Buffalo Killlers keeps impressing industry insiders. If you take a step back and look at what they have accomplished it’s easy to see that they are easily one of Cincinnati’s most successful bands. – CINCY MUSIC

“From the first ringing chord and cymbal crash, Dig. Sow. Love. Grow. is a freshly fueled two-ton truck, hauling a fertile stash of sounds that incorporate the Allman Brothers’ dual-guitar slither and Joe Walsh’s knowing snarl. ‘Course, since these sounds were born, more or less, in the ‘70s, Buffalo Killers have the ability to make anyone who digs those sounds feel as comfy as we did during Dazed and Confused’s first scene.” – Mary Leary / SAN DIEGO READER

“Don’t let those Beatles-esque album covers and Jim Morrison-inspired beards fool you. The Buffalo Killers are, in fact, from this side of the new millennium, though their music, apparel, and general Gestalt make it clear that, spiritually, they’re from the era of lava lamps and free love. The Cincinnati trio are contemporary progenitors of exactly the sort of rough-edged semi-psychedelic 1960s-era feel-good rock-pop (think the Black Keys, but with decidedly more groove) that has been conspicuously absent of late and, incidentally, is more than ripe for a resurgence, and in a big way.” – ART VOICE