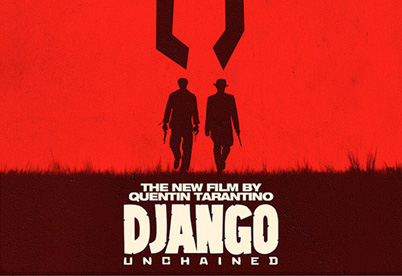 Tarantino describes his method of utilizing music (old and new) into the soundtrack of Django Unchained [from the director’s press release]: “I want to thank all the artists who contributed original songs (a first for me) to the picture. Most of these contributions came out of the artists’ own inspiration and their illustration of the film’s soul is invaluable. In addition to the new original songs I am also using a lot of older recordings on the soundtrack – many of which came from my personal vinyl collection. Instead of having the record companies give me new digitally cleaned up versions of these recordings from the ’60s and ’70s, I wanted to use the vinyl I’ve been listening to for years – complete with all the pops and cracks. I even kept the sound of the needle being put down on the record. Basically because I wanted people’s experience to be the same as mine when they hear this soundtrack for the first time.”

The soundtrack for Django Unchained will be released on December 18th before the movie opens on Christmas Day.

“Too Old To Die Young” is from Brother Dege’s critically acclaimed album Folk Songs of the American Longhair, which in 10 smoking, original tracks, recharges the cannon of the Delta Blues for the next century. Recorded in a shed in southern Louisiana, the album bursts with barn-burning slide and Dobro drenched tunes that reel, rip and scream like a master class in backwoods songwriting, while taking epic swings into the ambient darkness with Paris, Texas-like passages into the great unknown. It’s haunted, it’s harrowing, and it rocks.

Avoiding traditional DIY, indie career moves and following his own quirky southern sensibilities, Dege is known for playing guerilla shows in gigs in the swamps, open fields, low rent motel rooms and even public bathrooms. In addition, he has supported himself at various times by driving a cab, working in auto shops and, more recently, homeless shelters.

Brother Dege is also putting the finishing touches on his second album How to Kill a Horse (due early in 2013) which promises to push the slide and the traditions of the Delta blues far into the darkness of the millennium.

FOR MORE INFO ON THE “DJANGO UNCHAINED” SOUNDTRACK:
http://www.unchainedsoundtrack.com/