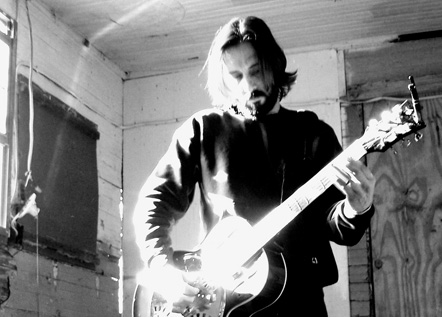 If Robert Johnson were alive…he’d be stealing licks from this cat.

Feeling the bite of 21st century ennui? Hell with it. Strap in, turn on and tune down with some dark-as-a-black hole Delta blues. With 2012 here, the Mayan calendar coming to a close and Planet X swinging over the horizon, you may as well ride it out with some swamp infested, pass-the-Prozac slide-Dobro guitar.

And there’s no better way to ride out the end times than jamming some Brother Dege tunes – the Deep South’s best kept secret since the Georgia Guidestones. Brother Dege (aka Dege Legg – Louisiana born, swampland mad genius, and also frontman for the Lafayette, LA-based rock band Santeria) is on a strange roll: working in a homeless shelter (file under: “Gnarly Career Moves”), recording the follow up to Folk Songs of the American Longhair in a empty warehouse, and disappearing for days in the backwoods of his native Louisiana.

Brother Dege recently teamed up with Louisiana filmmaker Brian C. Miller Richard for a beautifully pro-shot, mini-epic video for his song “Black is the Night.” Shot at various locations, the video – like some haunted nocturne – is a dark meditation on the spooky breed of loneliness, solitude and isolation that characterizes Louisiana.

In other news, Brother Dege will once again be pulled from his reclusive environs to perform at the 2012 New Orleans Jazz & Heritage Festival on May 6th along with other acts that day such as Foo Fighters, Bonnie Raitt, Sharon Jones & The Dap-Kings, as well as fellow Louisiana legends like The Preservation Hall Jazz Band, The Wild Magnolias, Rebirth Brass Band, Kermit Ruffins and many others.

“Dege Legg is the Robert Johnson of the 21st century.” –  ROOTSVILLE

BROTHER DEGE – BORN ON THE BIO

Louisiana born and raised Brother Dege is one of the best kept secrets in the Deep South – a writer, musician, artist, and a one-man band, pushing the resonator and slide guitar into the 21st century like some mad lovechild of Robert Johnson and Lou Reed. Mixing the traditional slide playing of the Mississippi Delta Blues masters (Son House, Blind Willie Johnson, Bukka White) with the post-modern expressionism of Sonic Youth, along with some world-class songwriting, Brother Dege’s critically acclaimed songs veer from haunted slide-guitar scapes to raw, Delta blues barn burners that take the listener on a trip into the south’s swampy rural past and the great unknown of the future. His most recent full-length album Folk Songs of the American Longhair was voted one of the top blues and roots albums of 2010 in Europe and the U.S., and his song “Hard Row To Hoe” from this album was also used as the opening theme song for Discovery Channel’s popular show After The Catch last year (click here to view).