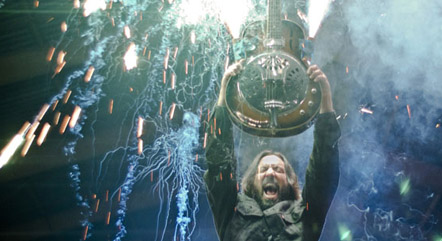 Brother Dege (“deej”) (aka Dege Legg) is a musician, writer, Southern enigma and the haunted face of 21st century Delta blues. Like the possessed offspring of Faulkner and Son House, he plays slide guitar in the age-old tradition of the blues greats, yet manages to breathe new life into this revered Delta idiom.

The reclusive Louisiana Cajun will be hitting the road with his new backing band, The Brethren (featuring drummer Steven Gardner & bassist Chris DeShazzo of Frigg a-Go-Go), in May before going solo in June on a tour with the Portland, OR-based band Truckstop Darlin’.

Brother Dege has also recently finished his second album How to Kill a Horse, which promises to push the slide-guitar and the traditions of the Delta blues far into the darkness of the millennium. He’ll be road-testing these new tracks this spring/summer prior to the album’s release later this summer/early fall.

To tide fans over until then, Dege is offering a free download of a studio version he recently recorded of Black Sabbath’s “Supernaut.” In his own unique way, he’s managed to shapeshift this heavy rock number into a bone-chilling slice of modern Delta blues. Click here to download and share Brother Dege’s ” Supernaut.”

In addition, Dege’s song “Too Old To Die Young,” from his critically-acclaimed debut album Folk Songs of the American Longhair, was handpicked by Quentin Tarantino for inclusion in the soundtrack of his recent Academy Award winning film Django Unchained, which was just released on DVD & Blu-ray this week.

“Frankly, every track on the Brother Dege CD could have been in the movie [Django Unchained]. It works and has a badass score sound to it. Almost every song could be a theme song. It’s like a greatest hits album. But this song ‘Too Old to Die Young’… it’s pretty damn badass. And it’s used in the movie in a pretty damn badass way, I’ve got to say.” – QUENTIN TARANTINO

Click here to listen to the audio interview of Tarantino discussing Brother Dege and his music.