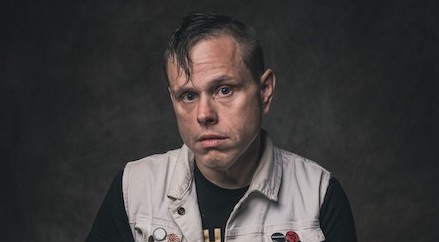 “‘Already Dead’ [is about] American Fascism and my experiences in Germany during the pandemic,” explains Lucas, who’s been living in the latter country since March. “I like to think of this song as a radical, therapeutic dance party anthem for everyone who is finding themselves arguing succinctly and logically, under impossible circumstances, with the willfully ignorant. A playful but unlikely mixture of John Mellencamp and Against Me!.”

“‘Already Dead’ weaves an entirely frightening but all too common narrative about the private and sometimes public arguments that many of us are having in this day and age,” Lucas continues. “It’s an unfortunate number of times that I’ve personally had to sit down and try to compassionately explain how hurtful it is when an old friend or a family member has befriended fascists, lifted these new people up in their lives and began adopting their toxic ideologies. The first verse picks up towards the end of the last friendly interaction two old friends will have before they inevitably part ways. As the song moves, it’s through a period of frustration where one friend is realizing that the other is truly lost, after long hours of attempting to shed light on how fractured their ideologies are. They find themselves tearfully realizing that no amount of discussion will effectively draw their loved one away from the hate that they have not only embraced but clearly do not fully understand.”
[Click here to read more]