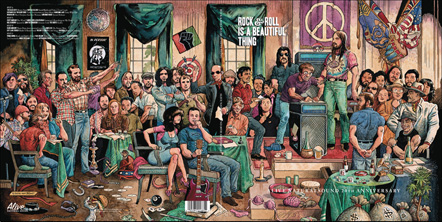 CLICK HERE TO LISTEN TO THE PREMIERE OF BUFFALO KILLERS’ COVER OF THE NERVES’ “STAND BACK & TAKE A GOOD LOOK” VIA POPMATTERS!

They may have recently been christened “the hottest label in blues” by Classic Rock’s BLUES Magazine in the UK, but over the last two decades the Burbank, CA-based indie label Alive Naturalsound Records have also proven to be a helluva lot more.

Oh sure, owner Patrick Boissel (who also happens to be married to his business partner Suzy Shaw of Bomp! Records) shamelessly wears his love for the blues on his sleeve. Along with releasing Mississippi blues legend T-Model Ford’s last two studio albums before his passing, he’s signed some of the hottest up-and-coming blues-rock acts, such as John The Conqueror, Lonesome Shack, Left Lane Cruiser, Radio Moscow and, most notably, one of the biggest bands in music today, The Black Keys. But for all the fans that may perceive the label as purely blues-rock merchants, there are just as many who think of Alive as purveyors of other great rock hybrids, such as punk, garage, psychedelic and power-pop, not to mention more recently even R&B, soul and funk… or in other words, one well-rounded record label.

On April 18th, as part of Record Store Day, Alive Naturalsound will be celebrating their 20th anniversary as a label with an exclusive vinyl-only double album entitled Rock & Roll Is A Beautiful Thing. But instead of being just another label compilation of previously released material slapped together, Boissel has brought together newly recorded tracks, unreleased studio outtakes, spirited cover songs, and tracks available on vinyl for the first time from this sprawling roster of talent (many produced and mixed by renowned producer Jim Diamond at Ghetto Recorders in Detroit). Southern rockers Lee Bains III & The Glory Fires rip their way through Swamp Dogg’s “Total Destruction To Your Mind” (the latter who Boissel also signed in conjunction with the expansive 2013 Swamp Dogg Soul & Blues Collection). Roots-enthusiasts Hollis Brown turn in a fiery take of Willie Dixon’s “Spoonful,” while Cincy-psych-rockers Buffalo Killers revisit The Nerves’ power-pop gem “Stand Back and Take A Good Look.” (It should be noted that Alive also released The Nerves’ posthumous albums One Way Ticket & Live at the Pirates Cove, not to mention solo albums from former band members Peter Case and Paul Collins, the latter who is also featured on this collection with his new track “Baby I’m Love With You” from his recent Feel The Noise album).

A guy’s gotta make a buck, as they say, but Boissel’s primary focus for the label is, first and foremost, to work with talented acts and good people that he truly cares about. For this collection, 21 of these acts are brought together to run the gamut of deep blues, scuzzy Southern-fried rock, explosive power-pop, lysergically-laced psych-rock, gritty soul and Latin-spiced garage rock that, ultimately, reveals the heart and soul of Alive Naturalsound. Thankfully, and not unlike some of the best real rock & roll throughout the decades, things manage to get a little unhinged and hairy on these two winning platters, which, as is turns out, is indeed a beautiful thing.

The 20th Anniversary album cover, featuring all of the acts from these two LPs, is by illustrator William Stout whose body of work includes covers for the infamous ’70s Trademark of Quality bootleg record label, movie posters such as Rock ‘n’ Roll High School featuring the Ramones, production design for movies (Guillermo del Toro’s Pan’s Labyrinth, The Mist, etc), and some acclaimed paleontological art. His illustration for the Alive Naturalsound 20th Anniversary album is part of the current exhibition Revolutions 2 – The Art of Music (Forest Lawn Glendale Museum).

8. T-Model Ford – Someone’s Knocking On My Door (from “Taledragger”)