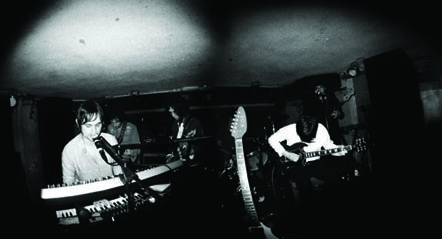 WHITE NOISE SOUND is the eponymous debut from the Swansea / Cardiff, Wales-based sextet. Completed with the help of Pete Kember (Spacemen 3, Spectrum and E.A.R) and magician Cian Ciaran (Super Furry Animals), the album is the realization of a band conjuring their own particular wall-of-sound – at once relentlessly pulsating and blissed-out.

The band had honed their craft across the UK and through Germany where they supported the likes of The Warlocks, Spectrum, Mark Gardener (Ride) and the Super Furry Animals, and shared the stage with members of Spacemen 3 and Spiritualized.

WHITE NOISE SOUND is a psychedelic dream-piece. It will be available on 9/21/10 on CD and PURPLE VINYL, ltd. edition of 700. The LP comes with an alternative cover.

HERE’S WHAT PEOPLE HAVE BEEN SAYING ABOUT WHITE NOISE SOUND’S S/T DEBUT:

“The self-titled debut album from White Noise Sound offers the closest recreation of the wall-of-sound built by bands like My Bloody Valentine and The Jesus and Mary Chain in years. It is clear from the grinding, echoing guitars and laconic vocals of “Sunset” (the album’s opening track), that this Welsh sextet has the musical onions to dive straight into this experimental form. This is an album that can be appreciated just as easily for its progressive nature as it can for nods to the past. Regardless of whether or not we find ourselves on the cusp of another retro fad, White Noise Sound have made a solid, intriguing experimental debut.” – BLAST MAGAZINE / BOSTON

“Feedback drenched songs haven’t sounded so good before. White Noise Sound clearly creates compelling and contemporary music that blows your mind away. Oozing out unsettling, yet uncompromising sounds they push the limits of what’s possible in music. Imagine a Syd Barrett led Pink Floyd exploring all their creative juices and taking their music to the next level in the 21st century and beyond. You are witnessing and listening to the future of greatness. “Sunset,” “There is No Tomorrow,” “Blood,” “Is It There For You,”  and “Fires in the Still Sea” are arguably the best songs found on this must-listen album. If you haven’t already, stop reading right now and go check them out immediately. You won’t be disappointed!” – THE RIPPLE EFFECT

“In this day and age of ironic and increasingly obtuse band names, a band like White Noise Sound is refreshing. Like the heyday of generic foodstuffs, what you see on the label is exactly what you get here. WNS has been influenced by earsplitting bands from both sides of the Atlantic, including Velvet Underground, Suicide, Jesus And Mary Chain and of course the aforementioned Spacemen 3.” – MY OLD KENTUCKY BLOG

“This aptly named band manages to get all kinds of drone going, and then revs into a full-on pop song when you least expect it.  A world of music is created here that exists at the corner of Krautrock and Shoegaze, with field trips to Psych and Garage.  Timely and timeless.” – PIRATE CAT RADIO / SAN FRANCISCO

“The mesmerising sound of psychedelic guitars never gets old and this new sextet from Wales is here to prove it. Riding a hypnotic beat through a controlled wall-of-sound, they refresh an underground heritage that wears its sunglasses at night and grooves to the special sounds of the Velvet Underground and their many progeny. With some tutelage from Spacemen 3′s Pete Kember, WNS’s impressive debut charges out of the gate with the Suicide-style propulsion of “Sunset” before finding a dream-like plateau of noise-y bliss.” – Chris Twomey / TANDEM

“We’re absolutely loving this sonic blast of intense, hypnotic pyschedelic rock from Welsh sextet White Noise Sound. It comes from their debut self-titled album and it is no surprise to discover the band had assistance with the record from no less than Pete Kember (Spacemen 3, Spectrum etc.) and Cian Ciaran from Super Furry Animals. Lead track is ‘Sunset’ and from just one listen you can see these boys could be destined for seriously big things in the spaced out world of stoner rock. Blending corrosive feedback, pulsating krautrock rhythms, floating vocals and wall-of-sound guitars, the track builds and builds into a perfectly judged ear-shattering, blissed out climax. Thoroughly recommended.”  – THE MAD MACKERAL / UK

“… blissed-out electronic soundscapes that feel like a dream.” – PHILADELPHIA WEEKLY

“If you’re gonna (essentially) cover Spacemen 3’s “Revolution” in 2010, good god this is the way to do it.” – ARTHUR MAGAZINE

“… like a cross between The Doors and The Jesus and Mary Chain with a sweeping, dramatic sound. I got shivers down my spine listening to “There Is No Tomorrow,” and “(In Both) Dreams & Ecstasies” is simply epic.  Listening to these songs reminds me of the first time I listened to Cranes; they have this other-worldly, blissed-out sound that’s just incredible.” – ADDICTED TO MEDIA