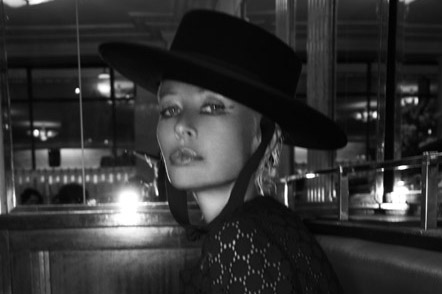 On her last solo album, 2010’s critically acclaimed I Came Here To Blow Minds, Wendy James recorded with French indie musicians who shared her passion for NYC punk, Detroit garage and new wave, but now she’s going straight to the source. Working directly with The Stooges’ James Williamson (guitar & bass) and The Bad Seeds’ Jim Sclavunos (drums & percussion) the former Transvision Vamp lead singer has created two stunning tracks on her new double-single that capture the urgency and spirit of not only early punk but rock’n’roll in general.

The A-Side is a version of Sonic’s Rendezvous Band’s “You’re So Great,” where Wiliamson’s signature search-and-destroy guitar riffs retain the gasoline-soaked essence of Fred ‘Sonic’ Smith’s original, yet the song is transformed into a high-energy slice of modern power-pop with Wendy’s boyant and soaring vocals throughout the track. The B-Side finds the trio digging deep into Bob Dylan’s vast canon with their own snaky and seductive take on “It’s Alright Ma.”

These two tracks are but an early sneak peek at Wendy’s forthcoming solo album.

Wendy’s new “You’re So Great / It’s Alright Ma” Double-Single is out now digitally and available through iTunes (purchase here), with a special limited edition 10″ vinyl pressing to be released in the near future.

WENDY JAMES ON ‘YOU’RE SO GREAT’:
Sonic’s Rendezvous Band are one of my favorites. They wrote song after cool song, like ‘Keep On Hustlin,” “Do It Again,” “City Slang,” “Sweet Nothin” and of course, “You’re So Great.” I got my chops singing hard and fast pop songs with Transvision Vamp, and when I heard “You’re So Great,” it viscerally hit me that Fred ‘Sonic’ Smith had written the complete essence of what I was good at. I stored the song in the back of my mind, and waited for the right moment to record it. When I met James Williamson the dots connected and we decided instantly to go and do this together. For all the reasons above and of course, he is bandmates with Drummer Scott Asheton (Stooges and SRB) and he represents Detroit and Ann Arbor, no-one captures the guitar sound of Michigan like James Williamson does. It’s obvious. It was just a question of who was going to shout ‘1,2,3,4…..’

WENDY ON ‘IT’S ALRIGHT MA’:
I, like millions of others, begin and end with Bob Dylan. Since I can’t remember when, maybe 12 years old? Bob has been my touchstone. His songs are what I listen to when I need to calm my soul, find my peace, find my strength, affirm my wisdom. Bob Dylan has tracked my soul for all my life so far, and always will. There are of course, so many many perfect moments from him, it’s mind-blowing the simplicity, the complexity, the effortlessness, the timelessness of his words and his melodies. Blood On The Tracks, Bringing It All Back Home, Desire, Slow Train Coming… I mean, I’m just going to list you everything. But… when I was about 13 years old I heard “It’s Alright Ma, I’m Only Bleeding” and that was it for me. He knew everything. Job done. Life explained.

So, now, 2012, when James and I had decided to do “You’re So Great” as a special Single Release, he asked me what my favorite Dylan number is and always, ultimately I go to “It’s Alright Ma.” Enthusiastically we decided to record both songs, and then… Let me tell you, there’s a big difference between listening to “Its Alright Ma” and singing it. I understand his rhythm, his intention, his breath, his humor, his message, to be clear: I understand his choice of words.

It was heaven in the studio, losing myself on the microphone, telling the tale, singing the truth, having my few hours bathing in that High White Noise… and James in the control room watching on proudly…Yes. It was a good day… It was the kind of day that explains exactly, innately, why one does this in life.

Bruised beatnik blues from blonde survivor. Wendy James comes on like a wild-eyed prophet, a fire-breathing feline and a disenchanted cyber-cowgirl. – UNCUT