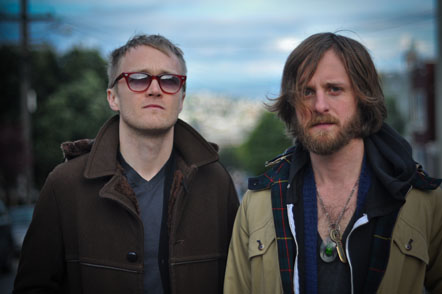 After a two year break, the San Francisco guitar-drum duo TWO GALLANTS will begin touring again this summer across the North America and Europe. The well needed time off came after six years of incessant touring and the release of three full-length studio albums and an acoustic EP. The band consists of childhood friends Tyson Vogel and Adam Stephens who met on their elementary school playground at the age of five. Despite an initial disagreement and ensuing scuffle over the supremacy of White Lion vs. Whitesnake, the two have been best friends ever since. They have been playing music together in some capacity since 1994, when their parents made the mistake of giving them both electric guitars for Christmas. Around 2002, the two college dropouts found themselves with some time on their hands and silence to kill; and so with an acoustic guitar and a trap set they formed TWO GALLANTS in the basement of the Vogel residence. In an ongoing unspoken competition to out do one another, the intervening years have seen the two-piece increase their volume and gear ten-fold. The bands’ sound is somewhat of a syncretism of American old-timey roots music with the grunge and east bay punk of Tyson and Adam’s formative years. The last show they played together was headlining The Fillmore in their hometown in December 2008. In the two years since, both have released solo material under Devotionals and Adam Haworth Stephens, respectively. But now they are looking forward to getting back to the haranging strident noise that fueled them across the world for six years. Come see TWO GALLANTS perform in a town near you this summer and look forward to a new album in the not too distant future.