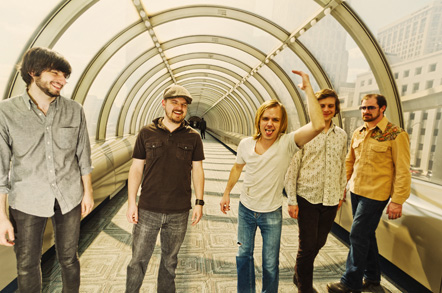 Detroit’s masters of heavy soul, The Sights, are a five-piece rock ‘n’ roll band renowned for both their incendiary live shows and acclaimed song-writing. Think Big Star & Badfinger fronted by Steve Marriott and you’ll get a pretty good idea of what makes these guys tick. Hailed by critics and fans alike, they continue to build on an incredible 14-year legacy of uncanny blues-rock meets power pop.

The Sights combine the unobtrusive honesty of The Band with countless slivers of influence from their own personal record collections: Ike and Tina, Solomon Burke, The Everly Brothers, Bob Seger, Tim Hardin and all manner of raucous, infectious songwriting. Starting in the summer of 1998, famed typhoon of energy Eddie Baranek (guitar/vocals) fronted evolving line-ups through 2000’s Are You Green?, 2002’s Got What We Want and 2005’s self-titled The Sights – all recorded at Jim Diamond’s (White Stripes, Electric Six, Dirtbombs) Ghetto Recorders in Detroit.

2010’s Most of What Follows Is True was an overwhelming critical success, placing in the top fifteen percent of The Village Voice’s 2010 Pazz and Jop listing and garnering press accolades from around the globe. With that record, The Sights achieved an unprecedented level of song and studio craftsmanship. In an era of soulless keyboards, drum machines and Autotune, Eddie & Co. responded with thrillingly catchy songs. No gimmicks, no studio trickery – just inspired rock ‘n’ roll from the heart.

2012 is shaping up to be The Sights’ best year yet. They’ve already supplied the music for two Chevrolet ads, and this summer will bring a new single (“Eso No Está Bien Pequeña/Like Two Little Kids”) as well as the release of their seventh effort, Left Over Right. On it, Baranek is joined by Jarrod Champion (keyboards/vocals), Dean Tartaglia (saxophone/vocals), Kyle Schanta (bass) and Skip Denomme (drums) where they deliver not only their most soulful album to date, but do it with all of the intensity that has fueled their previous recordings and live shows for well over a decade. If you love – really love – passionate songs that fire your imagination and move your ass, then you’re gonna really love The Sights.

The Sights have shared the stage with some of the best in the business: Robert Plant, Tenacious D, The White Stripes, The Dirtbombs, Sloan, The Datsuns, The Donnas, The Bravery, The Kills, along with many others. Their precocious ability to blend frenetic garage rock with ’60s pop and create something equally classic and catchy has garnered consistently rave reviews from both sides of the Atlantic. NME wrote “[The Sights are] a revelation – a treasure trove of sparky and wildly immediate songwriting” and Rolling Stone commented “at last – a new Detroit-garage band that comes in colors.”

Raucous? Infectious? That pretty well sums up The Sights’ live shows as well. It’s a rocket-ride that has been experienced by countless audiences throughout North America and Europe, and will surely win over thousands more this summer when they hit the road with Tenacious D as part of their highly anticipated Rize of the Fenix tour!

The Sights’ Left Over Right album will be available June 19th through HRM in CD, Digital and Limited Edition Vinyl formats.

May 27 Langano Lounge – Portland, OR

MORE DATES TO BE ANNOUNCED SOON

HERE’S WHAT PEOPLE HAVE BEEN SAYING ABOUT THE SIGHTS’ MOST OF WHAT FOLLOWS IS TRUE:

“The album’s great; it’s filled with sing-song themes of self-reproach and waning innocence, all delivered with the heartfelt zeal of a modern-day Faces. Do your duty and purchase a copy at your local indie record store.” – Brian Smith / METRO TIMES

“The Sights are an awesome band and their new record Most Of What Follows Is True is a great, great record. I highly recommend it.” – Keith Roth / THE ELECTRIC BALLROOM: WRAT RADIO

“…this was a record made out of the love for music and it comes through here on every ‘60s influenced power pop nugget, every Detroit sounding garage stomper and even the steel pedal induced tracks all back up The Sights early hype and prove that their talent has never diminished.” – THE FIRE NOTE

“The band comes out of the gate with the guitar-heavy “How Do You Sleep?” sounding like a mix between The Creation and Blue Cheer while “Hello to Everybody” is a charging power pop nugget which doesn’t forget the humor (“Well I tried suicide but it wasn’t for me, it got to be a little too trendy”). A few tunes add some nifty pedal steel (“I Left My Muse” and “Back to You”) while the jangly “Maria” adds a nice Beatles touch to the proceedings (and “Happy” is pure 1967 Who with those opening Keith Moon-esque thundering drum fills). Baranek proudly wears his influences on his sleeve but when the attention to songcraft is this detailed you won’t hear too much complaining. Their best yet.” – BLURT

“… a notable album that deserves your attention. Detroit rock band The Sights is rooted in their native Motown sounds, with a modern rock edge.” – John Hendricksen / THE DENVER POST

“…classic rock with a hint of blues and, this time around a little hint of country too.  It’s a corker… it’s rock and roll.” – HOT SPOT MUSIC

“Awesome opening track ‘How Do You Sleep’ may sound like it was recorded 35 years ago, but it, along with much of the record, transcends any era trappings, feels current, and kicks ass. The band wisely reteamed with old producer Jim Diamond, who is responsible for at least 75% of the best straight-up rock records of the past decade (The Dirtbombs, The Ponys, The Whites Stripes…etc), and doesn’t disappoint here.” – David Mansdorf / LOSING TODAY

“Five years after their last album, The Sights have returned with its strongest effort yet. Leader Eddie Bararenk has found the sweet spot in his songwriting, harnessing the melody of British-influenced power pop to the R&B-fueled garage rock of the band’s earliest days with tighter craft than ever before.” – Michael Toland / THE BIG TAKEOVER

“Much of The Sights’ first three records play like grinning, raucous romps through dusty record shops, spinning everything from blues to latter-British-invasion to mustachioed, solo-indulgent ’70s rock. Most of What Follows is True, with its sporadic brow-raising bluntness in autobiographical lyricism, could be the most illuminating, or at least heartfelt, Sights album yet. Musically, it’s simultaneously fresh, yet worn and comfortable, with three new members flexing their idiosyncrasies in instrumental inflection and switching off lead singing/writing. It’s still flat-out rock ‘n’ roll, but noticeably, on Baranek’s pieces, more candid.” – Jeff Milo / REAL DETROIT WEEKLY

“The Sights’ latest release is an explosion of tuneful power-pop gems that conjure up ‘60s British masters like The Kinks and (dare I say) The Beatles.  They stretch out on a few songs to dip into Country and some blue-eyed Soul.  A remarkable comeback.”  – PIRATE CAT RADIO / SAN FRANCISCO

“Put your pants on tight, because The Sights are back to rock them off. Their upcoming album, Most of What Follows Is True, is crammed full of hearty, gritty rock that could blow a house down.  Led by Detroit’s most underrated contributor to the rock world, Eddie Baranek, the newly-aligned four-piece will have you longing for simpler times when rock ‘n’ roll wasn’t drowned in pretension.” – QRO MAGAZINE