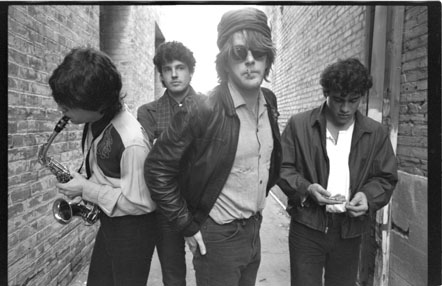 Live! Beg, Borrow & Steal showcases THE PLIMSOULS at the height of their power, tearing the roof off and on the verge of starting a riot on L.A.’s old Sunset Strip. Recorded at the Whisky A Go Go on October 31, 1981, this previously unreleased 18 song live album includes many of The Plimsouls’ classics as well as plenty of surprises. It has been stunningly remastered, features previously unpublished and gorgeous photos by renowned photographer Bob Matheu, and also includes three pummelling tracks (“New Orleans,” “Hey! Hey! Hey! Hey!” and “Run Run Run”) with special guests The Fleshtones.

The album will be in-stores (in both vinyl and CD) and digitally online through Alive Records on February 23rd. The first vinyl pressing of the record will also include a poster and is limited to 1,000 copies. Considering that all of The Plimsouls official studio releases are currently out of print, this explosive live document of the band igniting The Whisky nearly three decades ago stands as not only a highly anticipated release from the band, but also as a testament to the power of pure, unadulterated rock & roll.

“Formed in 1978 by Peter Case (vocals, guitar) following his departure from The Nerves and The Breakaways, with Louie Ramirez (drums), Dave Pahoa (bass) and Eddie Muñoz (guitar), The Plimsouls effectively blended roots, British Invasion and garage rock into one unique soul-punk, garage-pop combo. “They boasted a soulful front man and gifted songwriter in Peter Case; a brittle, unconventional lead guitarist in Eddie Muñoz; and a gutsy, power-packed rhythm section in bassist Dave Pahoa and drummer Lou Ramirez. The ‘Souls didn’t just replicate the cliches of power pop, as so many others did – they, and especially Case, were intent on putting their own imprint on the rock and R&B styles they derived their sound from. Their keen originality and their ‘let’s-rock’ attitude removed them from the run of the mill. Despite the misguided notions of observers intent upon categorization, The Plimsouls were always their own men.” — Chris Morris