THE FLYING STARS OF BROOKLYN, NY 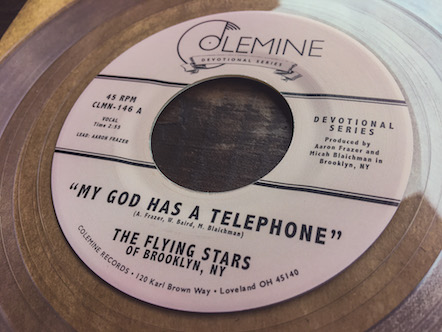 “My God Has A Telephone” is the debut solo single from The Flying Stars of Brooklyn NY, a deep-soul band led by Aaron Frazer of Durand Jones & The Indications. Aaron’s super sweet, silvery falsetto was featured on “Is It Any Wonder?” on The Indications’ debut LP, but the drummer steps out here with some low-down gospel soul with some help from friends including Eli Paperboy Reed.

Aaron’s previous song, “Is It Any Wonder?” has been the subject of several sync licenses, including the Netflix-original series Easy, Friends From College and Gypsy, as well as the upcoming films The Long Dumb Road and Piercing.

The Flying Stars of Brooklyn NY’s new single “My God Has A Telephone” backed with “Live On” will be available on limited 7” vinyl 45s, digital and streaming formats on October 20th via Colemine Records.