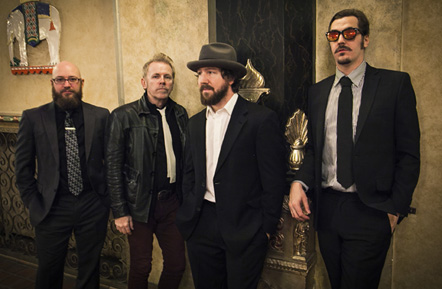 The Delta Routine have just released their fourth full-length album, You And Your Lion. While this effort follows a similar path laid out on their last acclaimed album Cigarettes & Caffeine Nightmares – incorporating elements of garage, power-pop, punk and classic rock – the Milwaukee foursome also add a more rough-hewn Americana undertone to the mix. This decidedly rootsier approach was influenced, in part, by the band’s heavy tour schedule, which as frontman Nick Amadeus admits, “The last year and a half of touring has been pretty important to me… getting to see a ton of the Midwest and East Coast, going into the mountains and seeing Colorado for the first time. Seeing Austin and Texas for the first time, first trip to New Orleans, first time playing Nashville, etc. I think all of that stuff really helped shape the direction of the new album. It’s also probably my closest thing to a travel album. I wrote a good majority of the lyrics on the road and that shows up a lot on this record.”

The Delta Routine’s You And Your Lion was recorded at the Factory in Chicago and co-produced by bandmembers Mike Hoffmann and Nick Amadeus. It’s available now on both CD and digital formats.