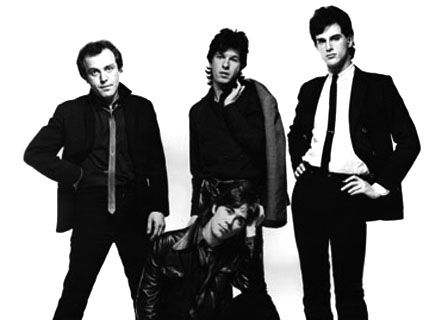 The recent release last winter of SORROWS‘ Bad Times Good Times (Bomp! Records) marked the first time ever that this music has appeared on CD as well as LIMITED EDITION VINYL. Filled with previously unreleased recordings of their power pop gems, demos and live performances, the album is a feast for post-punk new wave fans and collectors who have been asking for years to be able to get their hands on SORROWS’ music. Formed in 1977 in NYC by Arthur Alexander (ex-Poppees), Joey Cola, Ricky Street and Jett Harris (ex-Poppees), SORROWS were all about the songs. Their tunes are filled with strong melodies, irresistible hooks and creative harmonies supported by their powerful backbeat and hard-driving guitars. SORROWS two critically acclaimed albums and several singles on CBS Pavillion have become highly praised and are sought after collector items.

HERE’S WHAT PEOPLE HAVE BEEN SAYING ABOUT SORROWS’ BAD TIMES GOOD TIMES:

“Sorrows’ music is energetic, passionate power-pop expertly executed. Most importantly, it’s timeless. Their album Bad Times Good Times is a cool 48 minutes long, featuring 14 originals and two live covers at the end. The key citations here are ‘Beatles’ and ‘Flamin’ Groovies.’ If you want to follow that genetic lineage back to the source of classic rock and roll, look no farther than Sorrows, who will sing you a song of good times and bad times.” – Barry St. Vitus / BLURT

“The band excels at dreamy ballads like the “Silver Cloud” and soaring pop tunes like the glorious “Can’t Go Back,” but its real forte is rockers. “Second Chance,” “Teenage Heartbreak,” “Television” and the title track practically boil over with rock & roll energy, jolting the pop sugar with caffeine strained through Chuck Berry’s coffee filter. Not a false note is struck nor a dissonant chord jangled. Sorrows mix salty and sweet in a most savory way, and Bad Times Good Times will be enough to satisfy even the pickiest power pop jones.” –  Michael Toland / THE BIG TAKEOVER

“For folks who’ve been wondering when Sorrows’ Teenage Heartbreak would ever arrive on CD, Bad Times, Good Times isn’t the next best thing, it’s an actual improvement over the already fine original, and rescues one of the better pop bands of the ’80s from oblivion; folks who like their rhythms peppy, their guitars ringing, and their harmonies tight will find lots to love on this collection.” – Mark Deming / ALLMUSIC

“Honestly, there’s too many great songs on here to name but start with the title track, “Teenage Heartbreak”, “She Comes and Goes”, “Can’t Go Back”, etc. you’ll be hooked. Guaranteed!” – Mary Leary / DAGGERZINE

“Sorrows’ Arthur Alexander has said that their music is like ‘Abba meets the Sex Pistols.’ That concept may first strike you as an oxymoron, but when you hear Bad Times Good Times, you’ll realize it’s absolutely plausible, and it makes for some boisterous – and timeless – power pop songs.” – Jade Blackmore / BLOGCRITICS

“[9/10] Bad Times Good Times most likely describes the state of the band, how it’s all up and down, how their second album is just gone, and the fact that they never achieved the status they so deserved. Nevertheless, there are no “bad times” on this disc, and even if you have the original vinyl (like I do, of course!), you need to get this now.” – Stephen Rowland / POPMATTERS